The Highland Ravager is one of the eleven high dragons encountered in Dragon Age: Inquisition. It can be found in the east area of Emprise du Lion, in the northernmost ring, called Leontine's Ring, accessed via a small cave on the west side of the ring. To access the area requires completing the Restore Judicael's Crossing war table scouting operation.

Note: It is recommended to pick up the quest Breeding Grounds before going after the Highland Ravager, as the quest cannot be started if one of the 3 dragons involved has been killed before obtaining it.

In contrast to other High Dragons, the Highland Ravager can be surprisingly social, occasionally willing to share her territory with other High Dragons. Ravagers are known for their especially disastrous rampages, in which they consume entire herds and incinerate whole settlements, which increase in destructive enthusiasm if the Ravager is sharing her territory, possibly akin to "showing off to one's peers" or a way of establishing dominance.[1] 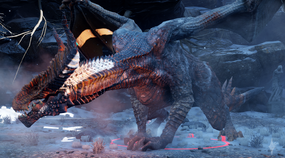 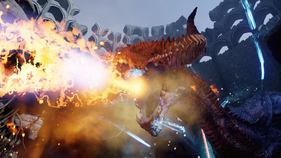 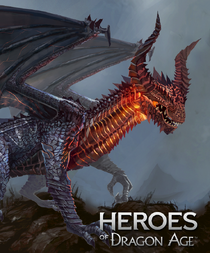 Retrieved from "https://dragonage.fandom.com/wiki/Highland_Ravager?oldid=882299"
Community content is available under CC-BY-SA unless otherwise noted.