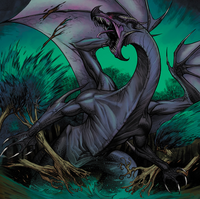 The Qunari tried to use a high dragon called Ataashi to destroy the Inquisition and all of the southern Thedas noble houses.