High dragons are fully mature adult female dragons, one of the rarest types of dragon. They once roamed the skies in great numbers, but by the end of the Blessed Age, many in Thedas believed that all of the dragons had vanished. High dragons used to be revered in the ancient Tevinter Imperium, and their Old Gods took the appearance of high dragons; and many dragon cults still exist to this day.

In 8:99 Blessed, the current Divine - Faustine II - was about to name the next age as Sun Age, but the sightings of a two high dragons changed that. A high dragon first emerged in Antiva, and then again to devastate rural Orlais and Nevarra.[1] Another dragon is also sighted by the Fereldan troops lead by Loghain Mac Tir on the Orlesian side of the Frostback Mountains, just before the battle of River Dane. The sight of a dragon's rise was thought to be a good omen for the rebels, who went on to defeat the Orlesian army.[2][3] The Divine decided that the next age should be called Dragon.[4]

In 9:10 Dragon, a group of Grey Wardens lead by the Warden-Commander named Genevieve, consisting of Duncan, Fiona, Julien, Utha, Nicolas, Kell ap Morgan, his dog Hafter, as well as King Maric Theirin encounter a high dragon underneath the Deep Roads on their way to the Ortan Thaig. After a long fight, Duncan jumped onto the dragon's back and stabbed it in the skull and neck, before being thrown off its back. The dragon still had enough life force left in it that it could attack the injured Duncan, but Julien pulled him out of the way, and in retaliation the dragon attacked him instead, throwing him across the lair. Julien landed with a broken neck, and was killed. The dragon was finally slain by Genevieve, who stabbed her greatsword into its head after it was already weakened by Duncan's daggers.

Sometime during the Dragon Age, the remnants of the Disciples of Andraste became dragon cultists, and started worshipping a high dragon who settled at the Mountain Top by the Temple of Sacred Ashes. The cultists tended to the dragon's eggs, offspring, and its mating drakes. They believed the dragon to be a reincarnation of Andraste. The Warden stumbles across the high dragon during their search for the Urn of Andraste.

If the Warden joins the cultists:
Father Kolgrim convinces the Warden to join the order. He asks the Warden to pour the high dragon's blood into the ashes of Andraste. As thanks for doing so, Kolgrim bestows upon the Warden the secrets of the way of being a Reaver. Kolgrim promises the help of the dragon in the Fifth Blight, but states that Andraste may not be ready yet.

If the Warden doesn't join the cultists:
The Warden chooses to kill father Kolgrim and take Kolgrim's Horn pc

from his body, or hit the gong located in the ruins ps3

, which summons the dragon down from its nest in the mountains. The Warden may also choose to attack the dragon with ranged attacks. The dragon is killed by the Warden and their party.

A high dragon is encountered near the entrance to Drake's Fall in the Dragonbone Wastes during the quest Depths of Depravity.

A high dragon may be fought in the Bone Pit during the Act 3 quest Mine Massacre.

See Mine Massacre (strategy) for details on fighting this high dragon..

There are a total of twelve high dragons found across Dragon Age: Inquisition and its DLCs. All twelve have greater resistance to the elemental damage they produce. This in turn can allow for strategic planning from the vulnerability of the opposite element: Fire breathers are vulnerable to cold, cold breathers to fire, and electricity breathers to spirit. Eleven of them count towards the Dragon Hunter collection, the twelfth, Ataashi, does not. Ataashi is also the only known poison-based dragon.

Corypheus' Red lyrium dragon is revealed to be a high dragon that has been corrupted by red lyrium and augmented by Corypheus's magic. It apparently works as a tribute to an Archdemon or Old God. The war table mission Learn More about Dragons reveals that all dragons possess a high resistance to the darkspawn taint though they are not immune. Ultimately the Inquisitor will slay this dragon at the end of the main quest Doom Upon All the World.

Hakkon Wintersbreath - during the events of the Jaws of Hakkon DLC, Ameridan states that the Avvar god Hakkon was bound to the body of a high ice dragon frozen in time by his prior efforts. The Inquisitor must then slay Hakkon Wintersbreath as Ameridan's magical hold over Hakkon is fading.

Ataashi - during the events of Trespasser, the Qunari tried to use poison extracted from the high dragon called Ataashi to destroy the Inquisition and all of the southern noble houses of Thedas. In order to stop them, the Inquisitor can either decide to kill the dragon or set it free.

High dragons hollow out massive lairs for themselves; as an abundance of space is needed to house their harem of drakes, raise their dragonling offspring, and shelter their eggs. Living for more than a thousand years, they are seldom seen and spend most of their time sleeping and mating, living off the prey produced by the drakes.

High dragons are extremely territorial and will typically attack anything on site that trespasses within its claimed vicinity. Even larger creatures such as giants will be attacked, as The Inquisitor witnessed Vinsomer's combat with a giant on the Storm Coast.

Once every hundred years or so, the high dragon prepares for clutching by emerging from her lair and taking wing. She will fly far and wide eating hundreds of animals, most often livestock, over the course of a few weeks and leaving a path of devastation in her wake. During this time entire villages and forests can be reduced to ash. She will then returns to her lair to lay her eggs and will not appear in the skies again for another century.[5][6]

Doom Upon All the World 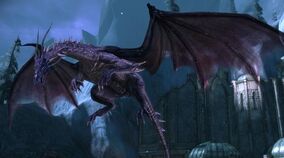 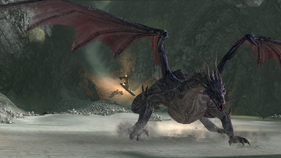 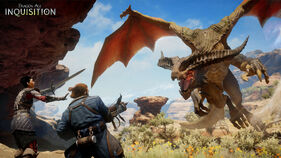 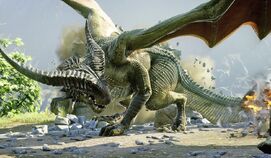 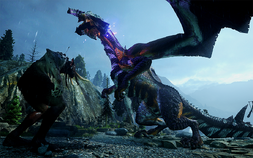 Vinsomer vs a Giant on the Storm Coast in Dragon Age: Inquisition 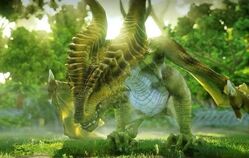 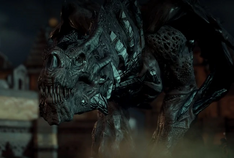 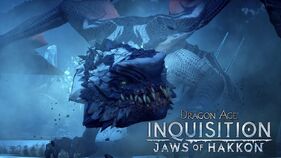 High dragon from Dragon Age: Dawn of the Seeker 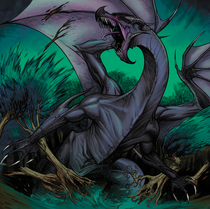 Tier progression of a High dragon in Heroes of Dragon Age 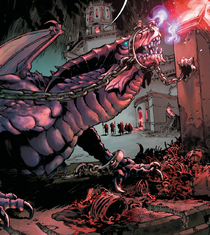 Queen of the Blackmarsh