Edit
watch 02:05
Wiki Targeted (Games)
Do you like this video?
Play Sound
“I am the penitent sinner who shows compassion in hope that compassion will be shown to him.”

Hessarian, also known as Hessarian the Redeemed[1], was the Archon of the Tevinter Imperium during the time of Andraste. He is a critical figure in Chantry lore for his role in ordering the prophet's death by fire. He was also the first to convert to the Chant of Light.

Maferath, the mortal husband of Andraste, betrayed the Alamarri warrior-prophet to the Imperium. With Andraste in captivity, the Archon decided her fate, encouraged by his wife Lady Vasilia to be ruthless though he originally wanted a quick death for Andraste. In a square in the capital Minrathous, Andraste was burned alive before a crowd of her adherents and enemies alike as an example to all those who challenged the Imperium, but showed no distress in her death. It is said that in the prophetess' final moments, the Maker spoke to Hessarian, filling him with guilt and compassion and so he drove his sword through her heart to put an end to her suffering.

Though Hessarian had originally intended to end Andraste's following, he refused to take action against them following her death.[3] Ten years to the day after Andraste's death, the Archon converted to the Chant of Light, claiming that he heard the voice of the Maker when his blade touched Andraste, and the beginnings of the religion took root. He declared the Maker the one true god, made Andrastianism the religion of the Imperium, and publicly revealed Maferath's betrayal. Most of the high-ranking clergy, including nearly all of the ruling Altus magisters, refused to give up their Old Gods, but the non-mage Soporati class overwhelmingly supported Hessarian, beginning a period known as the Transfiguration. With the High Priests dead, Hessarian repurposed the Old God temples into the first Circle of Magi.[2] There is apparently debate as to whether he was sincere in his conversion, with some suggesting that he simply found it politically expedient to embrace a religion which was already gaining popularity amongst his own people. However, his ghost/shade claimed to truly have felt pity for Andraste, feeling it was his duty as a true ruler to show mercy and that he hoped for mercy to be shown to him.

Archon Hessarian's act of clemency is a very influential tale in the Chantry, and his sword, covered in the flame of Andraste's pyre, is a well-recognized icon of the Templar Order. Being the Imperial Chantry founder, he is especially revered in Tevinter, where he is considered the most important of Andraste's disciples and the anniversary of his death is a religious holiday.[4]

After a long and tumultuous rule and life, Hessarian died in his sleep in -125 Ancient.[5]

Hessarian is one of the eight spirits the the Warden encounters in the Gauntlet during the quest A Test of Faith. It is unknown for certain if the shade came from Hessarian's immolation as a part of a ritual or not.

In order to advance the quest the Warden will need to answer the following riddle proposed: "She wields the broken sword, and separates true kings from tyrants. Of what do I speak?" 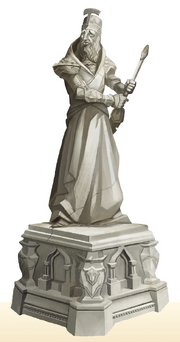 Hessarian's statue in the Ruined Temple operated by the Disciples of Andraste. 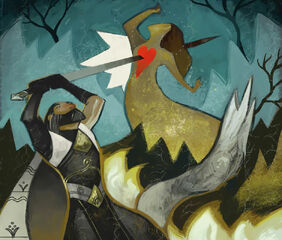 Artwork of Hessarian from Dragon Age: The World of Thedas Volume 2