watch 03:03
The Loop (Games)
Do you like this video?
“There are no borders for the mage who wields a spectral blade. There is respect, and there is fear.”

Commander Helaine is the trainer of the Knight-Enchanter specialization. She can only be encountered if the Inquisitor is a mage. 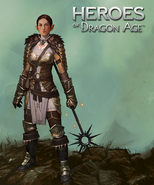 Knight-Enchanter Helaine in Heroes of Dragon Age
Add a photo to this gallery
Retrieved from "https://dragonage.fandom.com/wiki/Helaine?oldid=881778"
Community content is available under CC-BY-SA unless otherwise noted.