A violent cult named the Disciples of Andraste has taken root here, and they fanatically guard the Urn of Andraste from all outsiders. Because he seeks the Urn, Brother Genitivi is being held against his will in Haven. He can be rescued after his discovery in a secret room, once Father Eirik and the cultists within the village chantry have been killed.

Upon the request of Divine Justinia V in 9:35 Dragon Age, Haven has been restored and brought back into the fold of the Maker, giving shelter for the pilgrims who are visiting the Temple of Sacred Ashes. Following the events at the Conclave, Haven serves as the initial base of the re-established Inquisition. After the Inquisitor seals the Breach, the town is attacked by Corypheus's army. Though the Inquisition manages to bury a portion of Corypheus's army under an avalanche, the people in Haven are effectively trapped. Chancellor Roderick, however, reveals that he knows of a route which can be used to escape. The Inquisitor buys them time by realigning a trebuchet to cause another avalanche to bury the village. After a brief confrontation with Corypheus, the Inquisitor sets off the avalanche and escapes into a small cavern, while Corypheus' dragon flies him to safety.

With the loss of Haven, the Inquisition elects to relocate to the fortress of Skyhold.[1]

Following the battle and the Inquisition's arrival at Skyhold, a monument was built at Haven to commemorate the villagers and soldiers that lost their lives in the attack. 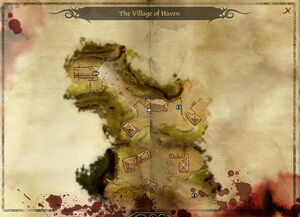 Map for Haven (Dragon Age: Origins)
Add a photo to this gallery

Note: The quests below serve as introductions to different aspects of the game such as crafting or requisitions:

Collected in the village environment

During The Threat Remains, after the cutscene

During Haven's Best and Brightest

After the tavern has been opened 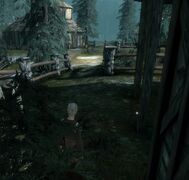 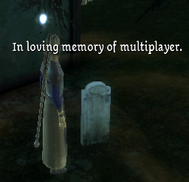 A scenic overlook of Haven in Dragon Age: Inquisition

Inside the village of Haven in Dragon Age: Inquisition
Add a photo to this gallery