This page contains detailed tips on how to fight the Harvester, the final boss of Dragon Age: Origins – The Golems of Amgarrak.

Note: Activation, Upkeep and Fatigue is 0 for all of the Harvester's abilities.

Since release of The Golems of Amgarrak DLC, the Harvester is commonly known to be one of the most - if not the most - difficult fights in the Dragon Age series.

At higher difficulty levels, the source of your character will play a key role in determining your options for this final battle:

If you wish to fight the Harvester on Hard or Nightmare, the following preparations are recommended:

This can be used in conjunction with any of the other strategies. If you have a lot of elemental damage traps, then seeding them throughout the entry area can make the second phase combat quite a bit easier. Allow the harvester and any corpses to chase you around the heavily-trapped area. You will need at least about 50 traps to be effective. Fire and soulrot traps do the most damage.

Keep your party up as long as possible, but once you are overwhelmed keep the skeletons and harvester at a distance by running in circles and only stopping to cast these crowd control spells: Mind Blast, Sleep, Cone of Cold, Crushing Prison (on non boss level skeletons), Force Field, Grease.

If Jerrik is dead, use revive on him and then put him on the Harvester again. He will likely die again, but just revive him as often as possible.

This section introduces a universal tactic for all classes, without having to deal with Harvester at close range.

Stay alert and keep your eyes on the red "dots" approaching the party on the mini map - divert their target to Brogan as soon as possible. When the skeleton numbers become uncontrollable, use the buttons to kill the skeletons. If done correctly, although time-consuming and quite boring, this will basically make Harvester become nothing more than walking meat-mash. 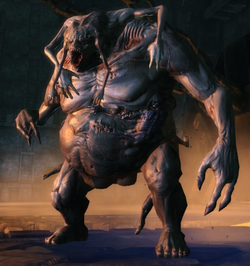 The battle will start as the Harvester's head enters its large golem-like body made of flesh. For the duration of this phase, remember that damage is key. There is no limit to the number of times you will have to press the switch or the number of minions the Harvester will summon, so the quicker you take him down the easier it will be. Jerrik needs to focus fire on the Harvester at all times (if respecced into an archer skill-tree).

As the Harvester will always use Vile Disembowelment first, you will want to avoid starting the fight with your party in its range. Start the fight by diverting the Harvester with your tank, making sure to sustain aggro (for those who are playing after Awakening, Air of Insolence is very useful to activate here). Start attacking the Harvester with your party, making sure to keep your golem at a good distance from it whilst also being able to benefit your team with Cleansing Aura. The Harvester's skills are powerful and quick, so keep a close eye on your tank's health; it will drop abruptly multiple times during the fight (for Awakening players: if you find yourself in a position where your tank's health is dropping fast and they're on potion/heal spell cooldown, don't forget to use Carapace to reduce damage).

The mechanics of the fight are organized such that when the Harvester switches from the "normal phase" to the "red phase," a switch on the side of the room will appear. The purpose of this switch is to remove any buff the Harvester gains from switching to the "red phase," whilst also eliminating any summoned skeletons. Do not always use this switch as soon as it appears! Sometimes the tank will do next to no physical damage whilst in the "red phase," in which case you will want to use the switch, but keep in mind that any skeletons that survive coming out of the red phase will be noticeably more powerful and will appear faded red. Sometimes there will be no significant alteration to the Harvester's defense or attack, in which case, you should be saving the switch for incoming skeletons who may be overwhelming you. The rank of the skeleton he summons is generally random. If the skeleton he summons is Normal, it will be mostly harmless and can be ignored or off-tanked by Snug. If it's an Elite skeleton, either take it down as swiftly as possible or immobilize it with an appropriate spell. If it's a Boss-ranked skeleton, you need to be very cautious; Boss-ranked skeletons hit as hard as the Harvester and will easily wipe your party if they are left to stray. Do not bother damaging the Boss skeletons; it is far more effective to focus fire on the Harvester whilst either taunting the orange skeleton with Jerrik's minion or keeping it in place with force field. Be wary that this fight is harder if the Boss skeletons make an appearance later into the fight when things are more chaotic; the idea is that you want to eliminate them by pressing the switch.

Whether you are playing on easy or nightmare mode, the best defense is offense; do not tarry the battle for long attacking the skeletons (although they are named corpses, they are supposed to be named skeletons). It is your best bet to throw everything you have at the Harvester itself. Skeletons will indeed bother you greatly, but if you are a powerful tank or you are also a mage (preferably Arcane Warrior), then it will be possible draw all the attention on you or keep the party alive with healing magic from yourself and the runic golem. Never attack the skeletons unless there are so many of them that you can't keep your party alive or can't reach the Harvester. The Harvester will summon minions faster than you can kill them, so it is not a good idea to kill the skeletons unless you are sure you can deliver large amounts of damage with quick attack. Another method that can be useful if low on health poultices is to set the golem's tactics to group heal when health is below 90% for any ally, and to have whoever the tank may be taunt and run around the room to give more time to get a few more group heals off. This tactic is especially useful if playing hard or nightmare difficulty.

Another useful tactic is to cast both Walking Bomb and Virulent Walking Bomb. This will cause a glitch in the damage check for lasting damage effects which will double the damage of all spells like walking bomb, Stinging Swarm, Curse of Mortality, and the lasting burns from flame spells.

Once you have defeated the first phase of the Harvester, the head will detach from the corpse body and fight with its lizard-like personal body.

Again, in this part of the fight you will want focus fire on the Harvester at all times. Jerrik - with Feign Death and/or Distraction - will be able to keep aggro off him at all times whilst dealing heavy damage to the Harvester. Your golem should try to avoid garnering any attention from the skeletons so it can revive your party if necessary. You may find this fight easier if you are an archer, as the Harvester's speed will not hinder your damage. If you are not a Spirit Healer mage, then unless you are a powerful tank, the battle is essentially hopeless if your runic golem dies (especially if you are playing on hard or nightmare). Make sure the runic golem stays alive, as it will be the only source of healing in case you are not a mage. This fight is something of a perfect challenge because being a mage is extremely useful in this fight for the healing, but at this stage the harvester is all but immune to magic. This can be remedied by using an Arcane Warrior and equipping an ax or a sword.

This part of the fight is significantly harder not because of the Harvester itself, but because of the skeletons. First, the skeletons can no longer be eliminated by a simple press of a switch (although it is possible to kill them if you saved the switch and push it right after you enter the second phase); they stick around for a long time and need to be killed or crowd controlled. If you find it easy to eliminate the skeletons, then you might be able to afford some time to kill them one by one, although you should keep in mind they will still spawn rapidly and randomly. However, once again, the orange skeleton(s) will prove very difficult to handle and you should attempt to either soak up all their damage with your tank or crowd control them for as long as possible. In addition to the skeletons the Harvester will make from the piles, they will still spawn randomly without the Harvester's action. There is a bug here where all your attacks on skeletons will be "miss", unlike attacks on the Harvester. The skeletons are so powerful on Nightmare that unless you respec Brogan it will only take a few seconds for even two normal level skeletons to kill him. Mages are probably better off soloing this fight on nightmare, using Mind Blast to keep the corpses at bay.

Throughout the fight, the Harvester will travel around the entire room with great speed, usually traveling with its skeletons. In addition, the Harvester will switch phase from "normal" to "red," as it did in phase one. The difference this time is that the phasing will only improve the skeletons. Red-phased skeletons - who will glow red and look transparent - are significantly stronger and harder to hit. As soon as the Harvester switches phases, this is the time to control the skeletons or else you risk losing your entire party (for Awakening players: Carapace is invaluable at this part). Eventually, when you get the Harvester to around 20% HP, all the skeletons will die instantly. If you manage to reach this point, then you have a good shot at defeating the Harvester. The harvester will from this point revive slain skeletons and switch rapidly red and normal light; with the current glitch that makes skeletons immortal, with red light activated the fight should prove to be nearly impossible.

BUG: On xbox 360 during the harvester fight the switch will be unable to be activated.

^ the above note may be a bug. I had a tank who did not have the above listed statistics and the character did fine. However, the author of that point makes a good point in the utilization of grenades. Please note that even if frost grenades do minimal damage, they may have value as a last ditch crowd control item as it can still freeze the skeletons to buy you time.

Retrieved from "https://dragonage.fandom.com/wiki/Harvester_(strategy)?oldid=857269"
Community content is available under CC-BY-SA unless otherwise noted.