Halward Pavus is a Tevinter magister and the father of Dorian. He is also the current head of the Pavus house and lord of an estate outside Qarinus. He lives with his family in Qarinus.

Halward is a highly regarded, highly respected and very traditional Imperium magister. It is mentioned that Halward had plans to marry Dorian off to a noble Tevinter woman to preserve the prestigious Pavus family line, and that he had expectations that Dorian failed to meet.

At some point, Halward found out about his son's homosexuality and attempted to use a blood magic ritual to force his son to "do his duty," inadvertently driving Dorian away from the Pavus household.

The speculation over Dorian's sudden disappearance after the many scandals surrounding his hedonism and debauchery eventually forced Halward to step down from his seat on the consiliare for the Archon, a loss of prestige Halward was never able to regain.[1]

Soon after recruiting Dorian Pavus and settling into Skyhold, a conversation with Mother Giselle reveals that his father, Halward, has sent a letter from Tevinter requesting that the Inquisitor convince his son to meet a family retainer at Redcliffe's Gull and Lantern tavern. Bringing Dorian to the tavern will reveal that it is Halward himself and not a family representative who has come to meet them. Halward then asks for his son's forgiveness, confessing that he believed what he tried to do back in Tevinter was a misguided attempt at securing Dorian's happiness, and claiming he only wanted what was best for his son. The Inquisitor can decide to either persuade Dorian to reconcile with his father or encourage him to hold onto his anger, but regardless Halward does not encounter the Inquisitor again, although he is still mentioned occasionally by Dorian.

If the Inquisitor brings Dorian into the Fade during the main quest, Here Lies the Abyss, the fade demon will taunt Dorian with his relationship with his father, which Dorian will say is, "Rather uncalled for."
This section contains spoilers for:
Trespasser.
It is revealed that two years after Corypheus' defeat, Halward campaigned for his son to be named Tevinter's ambassador to the Exalted Council and the Inquisition, for his "special interest in the south". Presumably, it was to keep Dorian out of danger as Halward was believed to have been assassinated soon afterwards. Dorian is notified of his death and that he will assume his father's seat in the Magisterium as his heir. 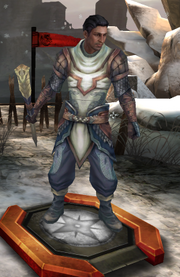 Retrieved from "https://dragonage.fandom.com/wiki/Halward_Pavus?oldid=890241"
Community content is available under CC-BY-SA unless otherwise noted.