Gurd Harofsen is an Avvar warrior, formerly of Red Lion Hold in the Frostback Basin; now the leader of the Jaws of Hakkon.

Despising his kinsmen for their peaceful demeanor, Gurd left Red-Lion Hold in search of fights and joined some Fereldan mercenaries. During the Fifth Blight many in his hold died from the darkspawn and blight sickness, including Gurd's father, Harof Talespinner. The thane was killed as well, but a number of the tribesmen survived. When Gurd heard about the news, he parted with his fellow mercenaries in Redcliffe and returned to the highlands. He felt betrayed by the Avvar gods who had allowed such injustice and angry at the lowlanders who refused to help. He was especially pained by the knowledge that his kin wouldn't know peace, as the Lady of the Skies sends no messengers to tainted bodies. He took in the survivors and proclaimed them the Jaws of Hakkon, as Hakkon Wintersbreath was the only god whom Gurd could forgive on the grounds that he had been "stolen by the lowlanders" and couldn't interfere. Gurd vowed to set Hakkon free and bring revenge on the lowlands.[1]

Gurd kept his hold moving until they found an old Tevinter fortress in the Frostback Basin; the Old Temple where Hakkon's spirit was bound in the body of a high dragon with time magic together with Inquisitor Ameridan. Unable to break the spell, the hakkonites decided to bind the spirit to another host. Despite the fact that Gurd had brokered an alliance with the nearby Avvar settlement of Stone-Bear Hold, he ordered his people to capture their hold-beast, Storvacker, to use as Hakkon's new vessel. Not long after this the Inquisition establishes a presence in the Frostback Basin, searching for relics from their original incarnation. Fearing the Inquisition will unearth the Hakkonites plan, Gurd orders all Hakkonites in the area to attack Inquisition forces on sight.

Gurd first encounters the Inquisitor at Stone-Bear Hold, while he and Thane Svarah Sun-Hair are in the midst of settling a dispute with a ritual contest for the Lady of the Skies. Gurd makes his contempt for the 'lowlanders' plain but does not attack while they are guests of another Avvar hold. After the contest, Gurd departs to rally the Hakkonites.

The Inquisitor eventually releases Storvacker and removes the ice ward protecting the Old Temple before launching an assault on the temple with the outraged Avvar of Stone-Bear Hold. Realizing there is no other option left, Gurd offers himself as the new vessel for Hakkon Wintersbreath, despite the warnings of his Augurs that he may not be strong enough to be a vessel for their god. The Inquisitor breaches the inner sanctum of the temple just as Gurd begins to draw Hakkon into himself with the ritual, transforming Gurd into a monstrous Revenant. Gurd is only able to draw part of Hakkon into himself before the Inquisitor disrupts the ritual however. Infused with the power of a god, Gurd attacks the Inqusitor and their party unleashing Undead and rallying the remaining Hakkonites in the temple to his side. After a brutal and exhausting battle however, Gurd is finally slain and Hakkon returns to the High Dragon host.

While attempting to draw Hakkon Wintersbreath into himself, Gurd Harofsen chants the following song:
Sing the song of savage Hakkon, born in battle, bloody bladed.
Wintersbreath to wrack the lowlands, cold to cut and kill the hated.
Meet the might of Mountain-Father, crush the creed of Korth the Callow.
Leave the Lady lost and lonely, scour the skies of spirits sallow!
Gurd Harofsen, called The Cutter, wyvern-slayer, lowland-bane
Begs of Hakkon, bring his body bloody blessings, cold and pain! 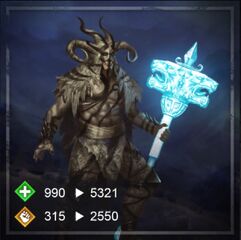 Artwork of Gurd in Heroes of Dragon Age

Tier progression for Gurd in Heroes of Dragon Age