The Guardian is a disciple of Andraste. He has remained alive for centuries, and will not abandon his guard until the Tevinter Imperium is destroyed.

The Guardian was among the first Disciples of Andraste to watch over the temple and prepare the way for pilgrims to honor Andraste. He also tells of how the disciples turned into a dragon cult because of an ancestor of Kolgrim who saw himself as a new prophet. Those who disagreed were slain except the Guardian who draws his power directly from the Urn of Andraste.

Talking to the guardian can provide a lot of knowledge of the world and can start the quest A Test of Faith, needed for The Urn of Sacred Ashes. The Guardian will ask a personal question to The Warden pertaining to the origin story and the companions. The Guardian is able to see into the life and history of every person he meets.

If you accept the vial of blood from Kolgrim and pour it into the ashes, he will attack you along with several others. If Leliana and/or Wynne is in your party, they will turn on you and you will have to kill them as well (unless you can intimidate Leliana). Once the battle is over you will also receive

Questions to the Warden

If the Warden is:

Tier progression of the Guardian in Heroes of Dragon Age 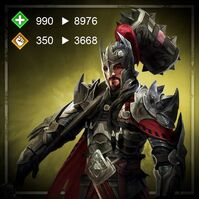 Retrieved from "https://dragonage.fandom.com/wiki/Guardian_(character)?oldid=813983"
Community content is available under CC-BY-SA unless otherwise noted.