For the other Grey Warden fortress located in this region, see Adamant Fortress.

Griffon Wing Keep is a former Grey Warden outpost in the Western Approach.

The Griffon Wing Keep is an old fortress built by the Wardens for use as an outpost to monitor darkspawn activity. The keep lies between the Warden's observation tower and Adamant Fortress, the main stronghold in the region. The keep was subsequently abandoned when the Wardens withdrew from The Approach. Drinking water for the nearby inhabitants was primarily obtained from a well found in the cave directly below the keep.

Prelate,
Griffon Wing Keep is a critical part of the Master's plan. You are instructed to hold it against the Inquisition assault to the last man.
—Servis

In 9:41 Dragon the Griffon Wing Keep is occupied by the Venatori to serve as a forward operating outpost in the Approach; it is commanded by a spellbinder mage, Prelate Macrinus. The Inquisitor may engage on an assault to claim the keep for the Inquisition; in which case the Inquisition will establish the keep into one of its outposts to patrol the region.

Repairs and fortifications originally initiated by the Venatori will be adjusted to Inquisition standards and completed. Knight-Captain Rylen will take command of the outpost and Inquisition soldiers and merchants will move in and occupy the keep, as well as the usual crafting utilities which can be found on the top floor.

On a small platform, reached by climbing a ladder on the top floor, an Astrarium can be found, through which Toth can be observed. While the keep was under Venatori occupation the water source from the Old Well beneath the keep had been contaminated from all of the corpses thrown in; a new source of water must be found and secured to continue Inquisition operations.

Find the Source of Darkspawn

Secure a Source of Water for Outpost

Deal with the Angry Varghests

Landmarks in the Approach

The Archdemon (piece #8) - found under the keep in the Old Well, near the Old Well landmark.

Up the stairs to the right, when coming in through the main gate. – Solas

Cowl of the Overseer - looted from Macrinus during the assault.

Kitty's Collar - looted from Macrinus during the assault.
Note: Requires installation of Patch 10.

Sad Splinters - looted after destroying the keep gate during the assault on Griffon Wing Keep. 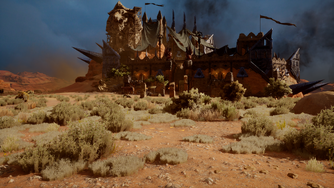 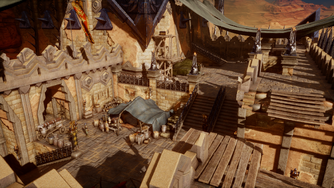 An overview of Griffon Wing Keep 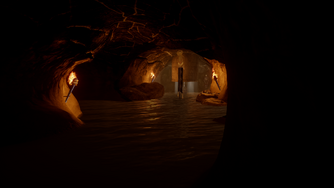 The Outpost Well under the keep

Retrieved from "https://dragonage.fandom.com/wiki/Griffon_Wing_Keep?oldid=884993"
Community content is available under CC-BY-SA unless otherwise noted.