watch 02:39
The Loop (Games)
Do you like this video?
“It is the innocent folk of Ferelden who matter. I would lay down my life, and the life of any mage, to protect them.”

Greagoir is the Knight-Commander of Ferelden's Circle of Magi, Kinloch Hold. He commands the templars of the tower and determines, together with First Enchanter Irving, which apprentices undergo the Harrowing to become full mages, and which become Tranquil.

In his younger years Greagoir was described by his superiors as a model Templar and was considered to be exactly what a Templar should be at his best. While Greagoir has served for the majority of his long career at Kinloch Hold, just prior to the beginning of the Dragon Age Greagoir was sent to Denerim for an unknown reason which was rumored to be punitive. To combat the rumors, and as a sign of his trust, Knight-Commander Robard appointed Greagoir his Knight Captain upon his return from Denerim. Five years later, Greagoir would be named Knight Commander.[1]

Greagoir has been Knight-Commander of the templar forces at Circle Tower for many years. In fact, most people, aside from the First Enchanter, can't remember a time when he wasn't part of the Circle. He is described by his colleagues as strong in his beliefs and devoted to duty. While he does not favor mages, he will not kill them without cause and has a grudging relationship of mutual respect with First Enchanter Irving and most of the Senior Enchanters, namely Wynne.

Greagoir's lineage is suggested to be a very long one, since the heirloom of his family dates back to the Alamarri.

At some point Greagoir is present at the Circle of Magi when he is presented a newly-captured Mage. As he starts to welcome him, the captured mage breaks lose of the Templars holding him and proceeds to slice open his hand to conduct blood magic. As his power starts to take hold, the mage begins uttering a message saying that as servants of a false god, the templars will pay. Before he can complete his message and ritual however, one of the templars strikes the mage down by tossing a dagger upon the back of his head.[2]

Over eight months later, one of the Templars presents the mage Veness to Greagoir, claiming that she has gotten pregnant. e promptly asks her the identity of the father, which she appears to be reluctant to give. He then slaps her violently in the face and orders his Templar to inform the Circle that two of their kind had been breeding and his intention to find out who the father is. Later, the members of the Circle undergo a proximity spell to determine the father's identity. Seeing the spell react to the apparent closeness of the mage Abernath, Greagoir believes he has found the father and sarcastically congratulates the mage.[3]

Taking Abernath aside, the mage inquires as to the fate of Veness. Greagor reiterates that magic is a sin of pride, and that the Templars have a duty to keep mages from offending again. According to Greagoir, he would rather execute them both were it not for the Chantry's wishes to take advantage of a child with dual mage parentage. That night a Templar informs Greagoir of Verness' apparent escape. Greagoir then gathers a group of Templars and assigns the phylactery to the Templar Sadatt, telling him that he cannot hesitate to kill any longer unlike with the earlier incident with the blood mage.[4]

Later that night a hurlock sneaks in to Greagoir's room and holds him at knifepoint, taunting him. The Hurlock reveals that it is controlled by something called the Man of Light and that it is finally here to avenge the many brethren of its kind that Greagoir and his men have killed. A group of Templars promptly break into the room and try to fight off the Hurlock. Before it can be killed, the Hurlock grabs ahold of one of the Templars as it plummets to its death, killing them both.[5]

Seventeen years later, the Templar Sadatt (now known as Duty) returns with a captured dwarf, mage and a boy. After hearing of the Dwarf's crimes in attacking the Templars, Greagoir determines that though his crimes cannot be overlooked, the strained relations between the Templars and the Dwarves mean that they cannot simply execute him. Thus Greagoir determines that the Dwarf must serve his house arrest, his sentence to be carried out within the Circle's walls. He specifies for the boy to serve in the kitchen while the girl will join the Circle.[6]

If the Warden is a mage, Greagoir will be present as they prepare to undertake the Harrowing, warning of the consequence of failing the test. Afterwards, he will be seen in a meeting with Duncan and Irving, arguing over mages sent to reinforce the king's army, and departs when the Warden arrives.

Later, when Jowan and Lily leave the basement after destroying his phylactery, Greagoir, Irving and several templars confront them. Jowan uses blood magic to knock them out, and escapes alone after Lily angrily denounces him for using blood magic. Incensed over a blood mage escaping, he tries to bar Duncan's attempt to recruit the Warden, either to punish them as an accomplice to Jowan's plan (if the player kept it a secret from Irving) or to make sure the Warden has not been affected by Jowan's blood magic (if the player cooperated with Irving) but is overruled.

He is later encountered by Wardens of all origins in Broken Circle, having ordered a lockdown on the Circle Tower due to abominations and demons running loose. When the Warden arrives seeking aid for the Fifth Blight, Greagoir will be present to discuss the issue.

The Warden can choose to side with the templars and purge all the abominations and surviving mages, or attempt to save the remaining mages. Greagoir will only be convinced the Circle is saved if the First Enchanter himself is there to tell him so. If Irving dies in the final confrontation, the Circle of Magi is lost. Regardless of the outcome, Greagoir will commend the Warden for being thorough in clearing out the abominations. If the Circle is saved, Greagoir decides the templars will remain at the Tower and resume their old role, while Irving pledges the Circle's support to the wardens. If the Circle is not saved, Greagoir will decide that, having still received no word from Denerim, it falls to him to decide the order's mission; with no more mages to guard, he chooses to pledge himself and his templars to the Grey Wardens out of duty and gratitude, as "surely destroying darkspawn is a worthy goal."

If the Warden recruits the templars, then Greagoir will appear as an ally atop the roof of Fort Drakon during the final battle against the Archdemon in place of Irving. If he survives the battle, it is revealed he eventually died of sickness after refusing aid.
Regardless of the choice made during Broken Circle, if the Warden is a mage who made the Ultimate Sacrifice, he will be present at the funeral. He mentions that while the situation at the Tower remains volatile, there have been no further possessions. He considers King Alistair or Queen Anora's idea to build a new tower baring the Warden's name "a fine idea" but initially objects when he hears the templars will no longer be supervising them; he finally relents when the king or queen points out what the Warden did without being guarded by templars.

This section contains spoilers for:
Darkspawn Chronicles.
Greagoir is encountered as an enemy who fights alongside Cullen, Wynne, and a few Templars in the Denerim Market District during the Slay the Healer quest. They guard the entrance to the Denerim Alienage, and the Hurlock vanguard must kill them to gain access to it. 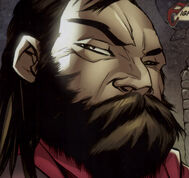 Retrieved from "https://dragonage.fandom.com/wiki/Greagoir?oldid=881861"
Community content is available under CC-BY-SA unless otherwise noted.