The Grand Oak, also known as the Elder Tree, is a large sapient tree, more commonly known as a sylvan, encountered in the West Brecilian Forest. It differs from the other sylvans in that it is not immediately aggressive towards the Warden when approached. For unknown reasons the sylvan only converses in rhymes when spoken to. It jokingly suggests that it may be due it fusing with the soul of a poet, and is thus a poet-tree. The Grand Oak appears to be lonely, and has an uncanny desire for companionship which has led it to place tremendous value upon its acorns.

Not much else is known about the Grand Oak's background except that it appears to be a spirit that has possessed a tree. It has lived in the Brecilian forest long before the arrival of Witherfang and the werewolves and took note of the disappearance of the forest spirit, but has not been around long enough to know why the Veil in the forest has become so weak. However, its guess is that a battle must have occurred in which many of the participants perished in the immediate area.

This section contains spoilers for:
Dragon Age: Origins.
It wishes to send the Warden on a quest to retrieve its acorn, which it says it cannot live without. This can be done by trading a book, a ring or a scarf with the Mad Hermit. If the Warden returns the scarf to Athras and receives the Dalish amulet as a reward, then that can also be traded instead. The Grand Oak will reward you for returning its acorn by giving you the Oak Branch. Obtaining the branch will allow you to go into the center of the Brecilian forest. Alternatively, you can choose to attack the Grand Oak to continue the Mad Hermit's quest line.

Upon death, the Grand Oak may drop: 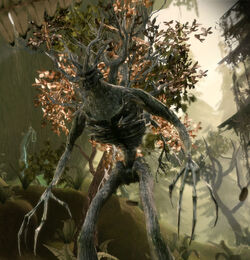 The Grand Oak in Heroes of Dragon Age