Edit
watch 02:05
Wiki Targeted (Games)
Do you like this video?
Play Sound
“It allowed me to forge a man of steel or stone, as flexible and clever as any soldier. As an army, they were invincible. But I told no one the cost...”―Caridin

Golems are creatures of hewn stone or sheets of metal animated with a spark of lyrium.

Caridin built the Anvil of the Void specifically for the process of building golems. Because he could not create new life, he had to use dwarf volunteers and turn them into golems. The process involves dressing the volunteer in armor the size of the golem, then pouring molten lyrium through the eye holes, mouth hole, and joints of the armor. Before it cools, the armor is hammered and shaped to perfection. A magical, not mechanical, process animates the golem, making it more of a living "steel/stone creature".[3] Most golems are made of rock and they rarely speak.[4] Enchanted control rods are used to turn the golems into perfectly obedient soldiers, at the cost of their free will. However if a golem lacks a control rod it retains its free will and perhaps its former personality returns as well.[5] According to Oghren, golems have a very sharp memory and can recall even minor things that happened long ago.[6]

Because the golems led to incredible victories against the darkspawn, who were steadily destroying the dwarven civilization, many dwarves gladly volunteered. Eventually however King Valtor began forcing criminals, casteless, and political dissidents to become golems. Caridin refused to create any more golems after six years of continuous production. In response to his dissidence, King Valtor ordered for Caridin to be turned into a golem and be as compliant as the rest of them. But Caridin's apprentices did not know how to properly create a control rod, so Caridin kept his own mind and free will and fled with his loyalists and the Anvil into the Deep Roads.[7]

The Shaperate of Golems is responsible for the maintainance and governance of golems. They wield authority over when and whether golems are committed to battle.[8][9] They're also interested in purchasing golems from any surfacer who owns one.[10]

After the loss of the Anvil and the means of golem construction the dwarves started losing ground once again to the darkspawn. Yet they still retained many golems within the army and most notably the Legion of Steel, an all-golem regiment numbering 126 golems.[9] It should be noted that among this regiment Shale was its only female volunteer.[5]

Out of desperation in the second year of the reign of Queen Getha the dwarves sent the entire Legion of Steel into the Deep Roads with orders to recover Paragon Caridin however no golems ever returned. Due to the incalculable loss of the Legion of Steel, Queen Getha was deposed and the Shaperate declared Caridin dead and never again allowed an all-golem unit into the deep roads, allowing their use only in the direst of emergencies.[9][11]

Other dwarven smiths have sought to rediscover Caridin's secrets, but to no avail.[11] Later experiments to create golems using an alternate source, such as fade spirits, were successful in creating uncontrollable flesh golems.

During the Fifth Blight, the Warden is able to track down Caridin, by following Paragon Branka's footsteps who she was the last dwarf who mounted an expedition to find Caridin in 9:28 Dragon. The Warden can either ally with Caridin to destroy the Anvil of the Void, destroying for good the only way to create new golems; or ally with Branka and allow her to create new golems to protect Orzammar. Some of those golems are later sent to help the Warden's armies during the Battle of Denerim.

During Hawke's expedition to Vimmark Wasteland, if Hawke sides with Janeka at the Tower Base, Larius will attack with three customized stone Golems.

During the Kirkwall Rebellion, Knight-Commander Meredith, with her lyrium sword created from the Red lyrium of the lyrium idol which was found in an expedition to the Primeval Thaig, is able to transfer a part of lyrium of the sword in the statues of the Gallows, turning them into golems.

Codex entry: The Legion of Steel 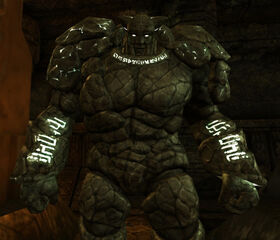 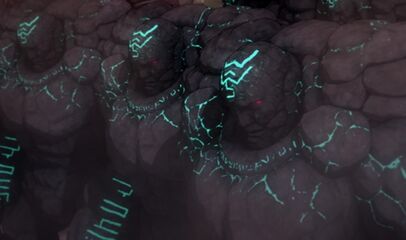 Golems in Dragon Age: Dawn of the Seeker 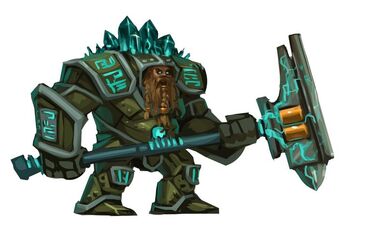 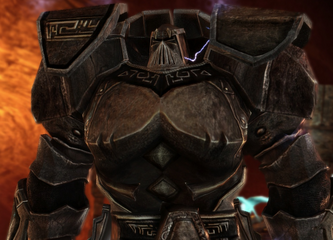 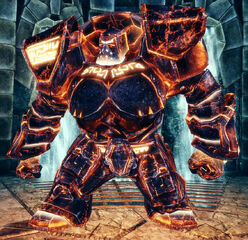 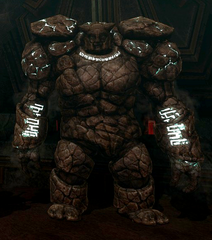 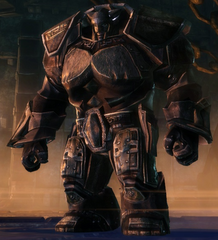 The Runic Golem companion from The Golems of Amgarrak 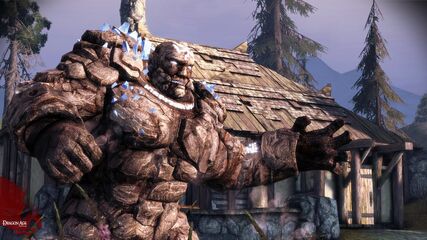 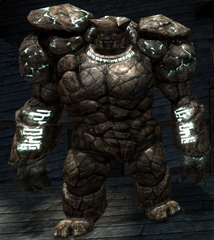 Thaddeus Gigantus Crumbum the Third encountered in the Black Emporium