A ghoul is a living creature who contracts the darkspawn taint and manages to survive. Humanoid creatures develop a blotchy look and a sickly tone to their skin, while the effects on animals are somewhat more drastic.

The term "ghoul" is actually derived from the behavior and mannerisms associated with people who have become corrupted. Once infected, a ghoul will seek out the darkspawn, who often use them as as craftsmen[1] or sometimes eat them,[2] although not for dietary reasons, as the darkspawn do not require sustenance.[3] The constant, slow exposure to the taint drives these souls to turn on their fellow captives, cannibalizing them whilst in the grips of maddening pain and the will of the Archdemon,[2] whose call they start to hear.

Humanoids develop symptoms such as fever and itchiness. Eventually, the disease progresses to the point where the body becomes degraded and misshapen by the corruption. For example, ghouls start to lose clumps of hair, flesh, and develop purulent sores. Given enough time, a ghoul's deterioration will eventually lead to death.[4][5]

Female ghouls are usually made broodmothers by the darkspawn. They are force-fed darkspawn tissue, and the darkspawn forcefully "spew" into the prisoners' mouths. At this point, Hespith describes the women who survive as being "violated", presumably raped by numerous darkspawn.[6] As this happens they gradually develop cannibalistic urges and mutate heavily, eventually becoming full-fledged broodmothers after devouring massive quantities of flesh. Despite their eventual transformation, broodmothers are still categorized as ghouls.[3]

The Grey Wardens have been able to survive the taint by undergoing the Joining; however, it is only a temporary escape, as with the progression of age the taint will spread and turn them into ghouls. When the taint advances enough in their bodies, they begin to hear the call of the Old Gods. At this point they know it is their time to travel to the Deep Roads to seek out an honorable death, as part of their Calling.

This section contains spoilers for:
Dragon Age: Inquisition.
Red Templars are Templars who have been transformed by red lyrium technically making them ghouls, due to the fact that red lyrium has been afflicted with the taint.

Animals which turn into ghouls grow bigger and become exceptionally aggressive, with some of them growing spikes and other strange mutations. It is not rare to find ghouls fighting alongside darkspawn.

These are the known tainted animal species:

Codex entry: To Be Corrupted

Artwork of a Ghoul from Dragon Age: Inquisition[7] 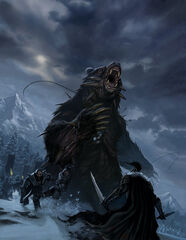 A Ghoul in an advanced state of decomposition