Edit
watch 02:05
Wiki Targeted (Games)
Do you like this video?
Play Sound
“As you were raised up from mortal men to stand with our Creators, our Makers, so raise me up now to defend this world.”―Ameridan's prayer.

Ghilan'nain is called the Mother of the halla—white deer-like creatures revered by the Dalish and used to pull their aravel, or "landships"—and goddess of guides and navigation.[1]

One day, Ghilan'nain came across a hunter she did not know. At his feet lay a hawk, shot through the heart by an arrow. Ghilan'nain was filled with rage, for the hawk is an animal much beloved of Andruil. Ghilan'nain called upon the goddess to curse him, so that he could never again hunt and kill a living creature. Ghilan'nain's curse took hold, and the hunter found that he was unable to hunt. Ashamed, the hunter swore he would find Ghilan'nain and repay her for what she had done to him. He blinded her first, and then bound her as one would bind a kill fresh from the hunt. But because he was cursed, the hunter could not kill her. Instead he left her for dead in the forest. And Ghilan'nain prayed to the gods for help. Andruil sent her hares to Ghilan'nain and they chewed through the ropes that bound her, but Ghilan'nain was still wounded and blind, and could not find her way home. So Andruil turned her into a beautiful white deer—the first halla.
—From Codex entry: Ghilan'nain: Mother of the Halla

According to Dalish tales, Ghilan'nain was a huntress of the People[2] and Andruil's chosen.[3][4] She was transformed into the first halla by Andruil[3]. Ghilan'nain rose to a godly rank.[4]

Ghilan'nain is invoked by the Dalish hunters when they struggle to find the way home.[5]

Ghilan'nain was Andruil's beloved. There are a number of different legends describing how she was betrayed by an elven hunter.[6]

Ghilan'nain's name is invoked when the Dalish wish to travel quickly.[6]

According to an inscription in the Temple of Mythal, Ghilan'nain herself created giants, monsters, and beasts that spanned across the sky, water, and earth. These creatures Ghilan'nain had killed in three days after Andruil approached her with an offer for apotheosis, sparing only those "monsters of air" that she presented to Andruil as a gift, some deep sea creatures and the halla. She thus became known as the youngest elven god.[7]

The sinner who dared to fly in the shape of the divine took wings at the urging of Ghilan'nain.[8]

Ghilan'nain's sacred animal is a halla. Constellation "Equinor", referred to as "the Stallion" in common parlance, might have been associated with the goddess.[9]

Ghilan'nain's Grove is located in the Exalted Plains.

This section contains spoilers for:
Dragon Age: Inquisition.
Inquisitor Ameridan built a shrine dedicated to both Andraste and Ghilan'nain inside Razikale's Reach.

This section contains spoilers for:
Trespasser.
In an elven riddle a halla is fleeing from the hunter. The riddle could have a second meaning, if the hunter in question is Andruil and all other animals correspond to their patrons in the pantheon. 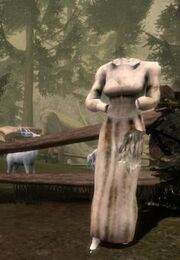 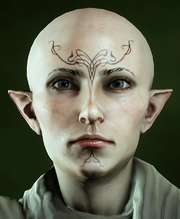 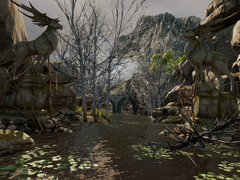 Halla statues in the Crow Fens 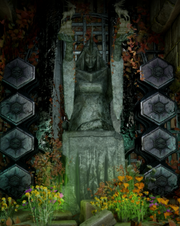 The shrine in the Frostback Basin