The Ghast is a short goblinoid creature that dwells within the mountain caverns of Thedas. Though individually small and timid, they are surprisingly vicious when encountered in large numbers.

Taking shelter in various mountain caves and rarely venturing to the surface, ghasts are highly territorial creatures who live together in packs. If they have sufficient numbers, they will drive away or even kill those who encroach on their territory with malicious fervor.

While they are cunning and have a basic understanding of cooperation, ghasts aren't considered truly intelligent beings, as they are incapable of speech. Despite this, some ghasts have demonstrated an aptitude for magic. Called velghastrial, these ghasts quickly rise up in the pack's social structure, and often become its leader.

Mark of the Assassin[edit | edit source]

Ghasts are a common nuisance in the region surrounding Chateau Haine. They are scattered in underground hives across the hunting grounds, both east and west sides as well as the Retreat and surrounding Mountainside.

If taken along to the Hissing Wastes, Blackwall recalls his prior encounter with ghasts in the Silent Plains.[1]

A Map of Sorts 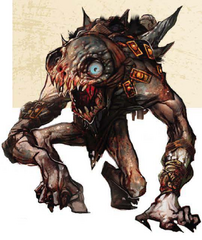 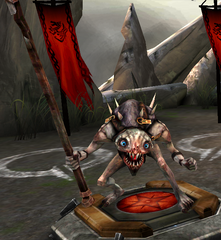 A ghast in Heroes of Dragon Age

Concept art
Add a photo to this gallery

Retrieved from "https://dragonage.fandom.com/wiki/Ghast?oldid=896745"
Community content is available under CC-BY-SA unless otherwise noted.