Edit
watch 01:54
Arcane: League of Legends - The Loop
Do you like this video?
Play Sound
“How many times have I tried? The past cannot be undone. All that I fought for, all that I betrayed... What have I wrought? Ruin and death, there is nothing else.”

In Hushed Whispers
Sit in Judgment of Magister Alexius
Judgment: The Magic Used in Redcliffe (conditional)

Gereon Alexius is a Tevinter Magister, member of the Venatori, and mentor to Dorian Pavus.

Long before he took his place in the Magisterium, Gereon made a name for himself as a magical researcher in the Circle of Minrathous. He investigated the limits of the known magical laws, pushing the boundaries of what ordinary magic could accomplish in traveling through and controlling both time and physical space. His partner for much of his academic career was Lady Livia of House Arida, who specialized in studies of the Veil.

Gereon's father ceded him his seat in the Magisterium in the hopes of spurring him to political pursuits. Magister Alexius became a tireless champion of education, criticizing his peers for pouring the Imperium's funds into the war with the Qunari at the expense of the Circle and demanding better schooling and institutions of higher learning for the Soporati. He also married his long-time partner Livia Arida, and took a position as professor of thaumaturgy at the Minrathous Circle.

Their only son, Felix, was born a few years later, and though he showed signs of magical ability very early, it quickly became clear that his talent was limited. Gereon's father, concerned that his heir was "just barely more than a Soporati" tried to have his own grandson assassinated. Lady Livia countered her father in-law's attempt, and then had him killed to safeguard her son's future.[1]

Though Felix lacked magical talent, he turned out to be a gifted mathematician, and his parents sent him at the University of Orlais to study with the best. Since they couldn't involve their son in their research, Gereon and Livia took in apprentices from all over Tevinter. Livia took a half dozen apprentices, scholars on the Fade and the Veil, but Gereon only took one, Dorian Pavus, a gifted student of thaumaturgy from the Minrathous Circle. For the next few years, Alexius and Dorian worked on breaking the boundaries of magic itself while Livia and her apprentices sought to determine the effects of such magic on the Veil. They were believed to be close to a breakthrough when tragedy struck.

In 9:38 Dragon, Gereon and Livia traveled to Val Royeaux to visit Felix at the university and return with him to Tevinter for the winter holidays. While crossing through southern Tevinter, their party was set upon by hurlocks. Though the creatures were driven off, Livia was killed and Felix infected with the Blight sickness. Alexius stopped caring about anything except his son's health. After a while, Dorian and Alexius had a falling out when Dorian brashly tried to tell a guilt-ridden Alexius to move on from the tragedy. Alexius and Dorian didn't speak again until he tried and failed to recruit Dorian for the Venatori.[1][note]

If the Inquisitor chooses to meet with Grand Enchanter Fiona, who apparently offered the mages' help in Val Royeaux- they will discover when they arrive at Redcliffe that it turns out that Fiona has no recollection of their meeting and claims they have never met. Fiona reveals that she has made the rebel mages under her care and herself indentured servants to the Tevinter Imperium, represented by Magister Alexius, in exchange for protection and eventual Tevinter citizenship. Alexius has taken things further and taken over Redcliffe Castle, banishing Arl Teagan and thus alienating the rebel mages' sole benefactor in southern Thedas. To Fiona's dismay, Alexius reveals that he intends to change the terms of their agreement and conscript all the rebel mages into military service under his command. As the Magister and Inquisitor begin negotiating, Felix feigns illness to pass a note to the Inquisitor and get his father to take a recess. Should the Inquisitor follow the note and meets Dorian, he and Felix reveal Alexius' involvement with a Tevinter supremacist cult called the Venatori, and that Alexius is very interested in the mark on the Inquisitor's hand. Dorian also reveals that Alexius used time traveling magic that warped the fabric of time to help him manipulate and conscript the rebel mages before the Inquisition could reach them.

If the mages were recruited:
The Inquisitor distracts Alexius under the guise of negotiating while Dorian helps Inquisition agents infiltrate the castle and slay Alexius' Venatori troops. Realizing that Felix has betrayed him, Alexius begins speaking about an 'Elder One', who will save Felix from death and restore Tevinter's glory. Declaring the Inquisitor "a mistake" for receiving the mark, Alexius pulls out an amulet to cast a time spell. Dorian interrupts him, accidentally sending both himself and the Inquisitor one year into the future.

In this bizarre future, the Inquisitor's absence had allowed the Elder One to reign supreme and where the Breach had covered much of the world. Journals detail how Alexius is still attempting to travel back in time at the behest of the Elder One, to before the creation of Breach, but the rift's magic prevents him from going to before its creation. Alexius had also become paranoid, anticipating that the Inquisitor would later appear and has fortified the castle defenses. When confronted by the Inquisitor, Alexius bemoans his failures and anticipates the end while also noting that Inquisitor is irrelevant as the Elder One will kill them both. Leliana takes a sickly Felix hostage before executing him. Enraged, Alexius attacks the Inquisitor and is slain in the resulting battle. Dorian then uses Alexius' amulet to reopen the time portal to return to the present.

Just after the Inquisitor and Dorian arrive at the exact moment they left, Alexius surrenders. Alexius then turns to Felix, saddened that he can't prevent his only son's impending demise, but Felix is more accepting of it.

If the Templars were recruited:
Dorian mentions that the Venatori killed Alexius once he stopped being useful.

The Inquisitor can pass judgement on Alexius after relocating to Skyhold...
At this point, Alexius has been disavowed by his country and stripped of his rank and title. He has become broken and accepts whatever judgement the Inquisitor metes.

Sit in Judgment of Magister Alexius 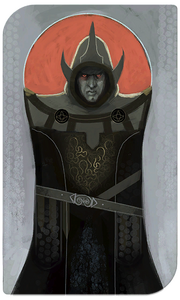 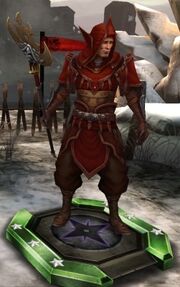 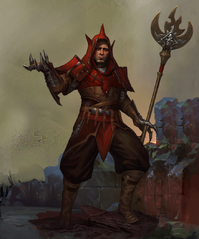 Artwork of Alexius in Heroes of Dragon Age