The Genlock forge master is a powerful genlock located deep within the Dead Trenches in Dragon Age: Origins.

This darkspawn can be encountered in a dug-out chamber after exiting the room containing several Legionnaire sarcophagi. The Warden can optionally confront this darkspawn group or move to the next chamber. The forge master is a reasonably strong opponent, and is supported by many hurlocks, genlocks equipped with bows, and one Hurlock alpha. It is advisable to draw these out one by one first, before engaging the Forge Master itself. From range, it will use a bow and potentially the Arrow of Slaying talent until engaged in close combat, where it will switch to a maul. Its hitpoints are substantial, and fighting it one-on-one can be difficult if there are still live darkspawn allies which are keeping the party occupied. 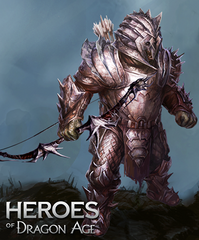 Retrieved from "https://dragonage.fandom.com/wiki/Genlock_forge_master?oldid=813152"
Community content is available under CC-BY-SA unless otherwise noted.