Genlock assassin acolytes is a genlock which employ assassin tactics.

A group of that genlock variation can be found in Fort Drakon, led by a Genlock Master Assassin. They seem to be found exclusively on the second floor of Fort Drakon during The Final Battle.

Stealth may refer to:

Mark of Death may refer to: 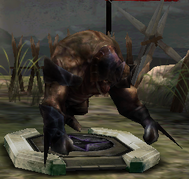 A genlock assassin in Heroes of Dragon Age
Add a photo to this gallery
Retrieved from "https://dragonage.fandom.com/wiki/Genlock_assassin_acolyte?oldid=558315"
Community content is available under CC-BY-SA unless otherwise noted.
FandomShop Fandom IG GalaxyQuest