Gears in the Deep Roads

Gears in the Deep Roads is a collection from The Descent DLC for Dragon Age: Inquisition.

Bloodstained ancient gears are scattered throughout the various regions of the Deep Roads. Collect them to open Gates of Segrummar, revealing the secrets within.

The collection triggers upon the Inquisitor's discovery of any gear. The first gear can be obtained after opening a gate during the main quest Rune-Warded Gate of Segrummar. Enter the adjacent room and defeat all the darkspawn, then continue forward and use the search feature to highlight the gear on the map and/or screen.

Shaper Valta, a temporary companion added with The Descent DLC, mentions that she does not recognize the metal from which the gears are made of and asks the Inquisitor to give her any spare gears in order to study them later.

Note: Despite the fact that the area you are in for numbers 7 and 8 is labeled as the Ruins of Heidrun Thaig, these two gears still count as Darkspawn Warren gears.

Note: The last two are past the room with the Cretahl operation marker that Bastion of the Pure gears 2 and 3 below are found and which will count toward that collection ahead of completing this one.

Bastion of the Pure[edit | edit source] 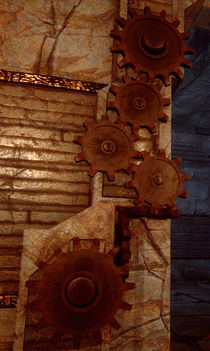 Retrieved from "https://dragonage.fandom.com/wiki/Gears_in_the_Deep_Roads?oldid=884768"
Community content is available under CC-BY-SA unless otherwise noted.