Edit
watch 02:05
Wiki Targeted (Games)
Do you like this video?
Play Sound
“I never expect any of us to survive, but it's true that the odds will be rather worse than usual this time. If that troubles you, you're free to stay behind.”

Garahel was an elven Grey Warden who lived during the Exalted Age and united Thedas against the Fourth Blight. He died putting an end to it by striking the killing blow against the archdemon Andoral.

Garahel was born a city elf and abandoned by unknown parents in the Alienage. He stayed in contact with his magically-talented sister Isseya during her time at the Circle of Magi,[1] and later joined the Wardens with her, becoming a griffon rider.

He was handsome and charismatic, with high cheekbones, curling blond hair and brilliant green eyes. Garahel's greatest gift was his charisma, and ability to inspire hope and bring disparate groups – including outcasts, and those who under other circumstances would look down upon him – under a single banner: a legacy that has lasted to present day.[2]

He remains a hero to all elves, and is especially beloved as an inspiration to city elf children growing up as he did in the alienages of Thedas.[3]

In 5:12 Exalted, when Andoral awoke and the Fourth Blight began, Garahel and Isseya were dispatched to Antiva City to assist in the evacuation. While the new riders were assigned griffons, Garahel bonded with an exceptionally odd-coloured beast, Thunder, whom he renamed Crookytail. When King Elaudio and Queen Giuvana's refusal to evacuate resulted in an armed insurrection, Garahel joined the Wardens in fighting the rebel Antivan Royal Guards. Afterwards, Garahel helped evacuate the surviving court members to Wycome on their griffons, with Garahel carrying an Antivan Crow mage called Calien d'Evaliste.[4]

As they fled Antiva, the Wardens were attacked by the archdemon Andoral itself. After Warden-Commander Turab and the other senior griffon riders were killed, Garahel split off from the other Wardens, leading an attack on the archdemon in order to buy the surviving Wardens time to escape. After a narrow escape, Garahel was assigned by Warden-Commander Senaste to work with Amadis Vael delivering messages and requests to aid to various influential nobles and mercenary leaders while the other Wardens prepared Wycome for evacuation before returning to assist in transporting the refugees to Starkhaven.[5]

Garahel was subsequently reassigned to the Anderfels to help the Grey Wardens defend Hossberg against the Darkspawn. During his time there he entered into a relationship with Amadis. Eventually, Garahel was promoted and given the temporary title of Field-Commander and placed in charge of the Hossberg front. After the darkspawn's reinforcements were cut off, Garahel led the allied troops on the main front from the city's northwest to break the siege. Once the darkspawn force had been defeated, Garahel set about securing troops for the upcoming efforts to drive the darkspawn out of the Free Marches. He secured Amadis Vael's mercenary company, the Ruby Drakes, by giving their captain her own griffon as well as persuading various other mercenary leaders that if they lent their soldiers to the Wardens they had a chance of gaining a griffon for themselves.

Garahel also managed to secure the Anderfels Royal Army by making a public statement of support for Queen Regent Mariwen to further legitimize her rule, and reluctantly agreeing to sleep with her as a dubious quid pro quo for military aid. This was ordered by Amadis, as she reminded him that she got him in bed every night, and supported by Isseya as a political move.[6] Garahel had planned to refuse.

In 5:20 Exalted, Garahel was temporarily ordered back from the front to Fortress Haine to deliver the First Warden's orders to Isseya that she was to evacuate Kirkwall immediately using joined griffons.[7]

Garahel continued to rally support from unexpected quarters against the Blight. Garahel gathered more Wardens from Orlais and the Anderfels, as well as allies from among casteless and exiled surface dwarves, former elven slaves and Apostate mages, forming the Stone's Bastards, the Masterless and the Broken Circle lay companies, respectively.[8]

Eventually, the darkspawn were driven back towards Antiva and Rivain and Garahel formulated a plan to lure the archdemon out so the Wardens could end the Blight. Garahel decided to personally lead a force of Grey Warden griffon riders to kill the archdemon. After a grueling battle and despite heavy losses, the archdemon was brought down over the city of Ayesleigh. Although the archdemon was severely wounded it had survived and the Grey Wardens were reduced to a fraction of their initial numbers. As the streets of Ayesleigh were swarming with darkspawn archers with their arrows trained on the sky, Garahel bid his sister farewell and alone flew into the city and struck the final blow against the archdemon, ending the Fourth Blight, albeit at the cost of his own life and that of his griffon.[9]

Afterwards, Garahel's remains were cremated outside Starkhaven at an elaborate funeral. His lover Amadis wore a black cloak of mourning in his honour. Garahel's funeral brought the rulers of many human nations, as well as the Grey Wardens and the remnants of Garahel's Broken Circle, Stone's Bastards and Masterless companies, together in mourning.[10] He and Crookytail shared a bier, receiving honors unprecedented for an elf.

Afterwards, Garahel's armour and weapons were taken back to Weisshaupt Fortress and placed in a glass coffin decorated with the horns of Andoral. The exception was Garahel's Helm which was lost during the battle with Andoral.

Axe of the Grey – an axe forged by one of Garahel's companions.

Longbow of the Griffon – description indicates it may be Garahel's bow, or else that of an elven rogue purporting to be his descendant. 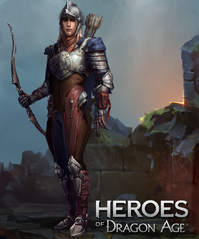 Artwork of Garahel from Heroes of Dragon Age

Artwork of Garahel's tier progression in Heroes of Dragon Age