The Gamordan Stormrider is one of ten high dragons that can be encountered in Dragon Age: Inquisition. She can be found in the Crow Fens in the far North-East of the Exalted Plains. The Gain Access to Ghilan'nain's Grove war table operation must be completed in order to gain access to the Crow Fens.

The greatest challenge of this fight is to avoid standing in any bodies of water. The encounter takes place in a marsh and the dragon can electrify the standing pools of water, causing damage to any party members while they're not on dry land. The water increases the range of the dragon's lightning breath attacks and increases the duration of each attack. There are also several poisonous pits in the area (the bubbling waters) which your party can get knocked into.

The best place to engage the dragon is to approach her from the southeast, where there is much more land for your party to stand on. Your party members should always try to stand on land whenever possible.

The Gamordan Stormrider will stay on the ground for most of the fight. She will make small jumps to cover distance at times. She will take off at least twice during the battle and fly around the area, launching balls of electricity at your party. Shortly after, she will return at high speed and land violently on the ground, knocking any nearby party members off their feet and dealing damage. Spreading your party out when she takes off is a good idea. Abilities like Evade, Fade Step and Combat Roll are useful at keeping your party out of harm's way.

All dragons will often attack any party member close to her with melee attacks. She will signify a melee attack by raising the leg closest to the party member she's targeting; avoid it with Fade Step/Evade/Combat Roll. Getting close to her tail will often make her raise her tail up and to the side in preparation to swipe the whole area behind her. A tail swipe is harder to avoid than an attack with her legs since it will cover a larger area, so the best thing to do is to stay away from her tail.

Every time the dragon lifts her wings high up over her body, she's about to use her "Vortex" ability, an ability all or nearly all dragons in the game have. She will flap her wings 4 times, and every time, she will suck your party closer to her and do high damage to them. The ability has an extremely long range so it's doubtful you can outrun it. There are 3 ways to deal with this ability:

The Gamordan Stormrider will also use her lightning ball ability if a party member that is not in melee range is generating threat. She will shoot a ball of lightning in a straight line which will explode on the ground and leave it electrified for a while. Any party member that walks over this will take damage. Avoid this ability with Fade Step/Evade/Combat Roll.

Focusing your party's damage on the dragon's legs can make the dragon fall to the ground helplessly for a short while when you have damaged all four legs enough. A dragon which has a damaged leg will be bleeding severely from the affected leg. She will also show a "pain" animation and jump away if you have damaged a leg enough. Focus your damage on one leg at a time; after you see that leg start to bleed, change to another leg. When the dragon is lying on the ground, it is a very good time to use many of the party's ground-targeted focus abilities (e.g. the Inquisitor's Mark of the Rift or Solas' Firestorm) since you know the dragon will not move for a short while. Typically it will take a very long time to damage the dragon's legs enough for her to fall, often taking almost the whole battle.

It is also possible to stand in the mountains near the dragon and attack her using a mage or archer without taking damage. 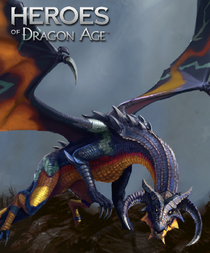 Retrieved from "https://dragonage.fandom.com/wiki/Gamordan_Stormrider?oldid=883592"
Community content is available under CC-BY-SA unless otherwise noted.