The Frostback Mountains are a towering range of mountains that run from the banks of the Waking Sea to uncharted territories in the south.

The mountains are considered highly inhospitable, and yet they house the native Avvar tribes, and, beneath the northern foothills, most of the continent's dwarves. The entrance to the dwarven city of Orzammar lies in Gherlen's Pass, with its permanent shanty-town filled with traders and petitioners, making it of strategic importance.[1][2]

The Frostback Mountains have had a place in Ferelden’s history for untold centuries. They are the natural barrier that made both the Tevinter and the Orlesian occupations ultimately fail as well as the nearly unassailable stronghold that allows the Avvars to continue to plague their estranged kin. The dwarves of Orzammar call the Frostbacks the “Frozen Teeth” in typically cynical dwarven fashion, because their many dangers chew up and spit out the unwary.[1][3]

The heights of the Frostbacks are treeless masses of rock and year-round ice. They are frequently shrouded in cold mists and can generate snowstorms out of season, sometimes even at the height of summer. Whether wreathed in fog or easily discerned, the peaks constantly loom over travelers, continually visible above the trees. The middle and lower slopes are heavily forested with coniferous trees: larch, fir, spruce, and a great deal of pine. Nestled among the evergreens are a few solitary broadleaves such as birch, rowan, willow, and aspen. The ground is covered with an assortment of mosses clinging to rocks and the trees themselves. Few plants other than a variety of lichens and some of the hardier mosses can grow in the soil of the forest floor, which is highly acidic.[4]

The middle and lower slopes are frequently wet, but the water is often frozen, leaving patches of snow on the ground for eight months of most years. In late spring and through the summer, the air becomes warm and humid. The farmers among the Avvars take swift advantage of the brief planting season by moving down from their stone-walled holds and into the foothills to grow crops, which they tend in nomadic fashion as they herd their flocks of goats and keep wary of lowlanders.[4]

Many rodent species live in the Frostbacks: marmots, hares, squirrels, and countless mice scurry about. Lynxes, foxes, weasels, and predatory birds feed on the rodents. Raptors such as eagles, owls, and hardier falcons are common, and the Avvars have a special relationship with them. Herds of elk, deer, mountain goats, and the occasional moose wander through the woods. What travelers have to really watch out for, though, are the larger predator species that do not fear men: crag wolves, wild brontos, cavern bears, red lions, and dragons.[4]

Right before the Battle of River Dane in the first days of Dragon Age, a high dragon ravaged the Orlesian side of the Frostback Mountains.

When the Grey Warden group along with King Maric are sent to the Fade by a demon in 9:10 Dragon, the dream of Kell ap Morgan is located in the Frostbacks, back in the days when he was a Jarl of an Avvar tribe.

The Frostback Mountains location on the world map transfer the Warden to a short pass which leads to the gates of Orzammar. Furthermore, the Village of Haven and the Ruined Temple in which the Urn of Andraste lies, are also located in a southern location in the Frostbacks.

After surviving the explosion at the Temple of Sacred Ashes, the Lone Survivor awakens somewhere in the Frostback Mountains, presumably near the now destroyed temple, having been taken into custody by the Chantry. Along with Cassandra, Varric, and Solas, the Lone Survivor fights through the Frostbacks to reach the Temple and help to close the large Fade rift that was created during the explosion.

Afterwards, they travel to Haven to set up a base camp for the survivors and to determine how to stop the Breach from growing.

Later, after Haven is destroyed, the newly formed Inquisition moves to Skyhold, a fortress deep within the Frostbacks, near the Dales.

The Wrath of Heaven

Codex entry: A Tale of the Frostbacks

Codex entry: The Circle of Magi (Human mage Inquisitor only) 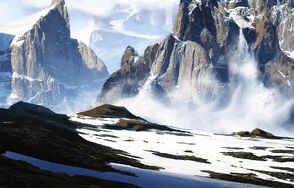 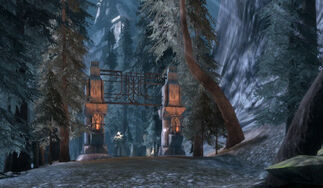 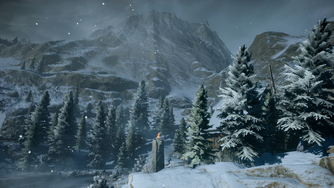 A view from the Frostback Mountains 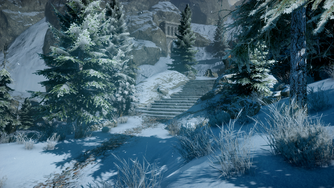 Retrieved from "https://dragonage.fandom.com/wiki/Frostback_Mountains?oldid=881096"
Community content is available under CC-BY-SA unless otherwise noted.