The Frostback Basin is a unique region near the southwestern border of Ferelden. Multiple terrain types can be found across The Basin as it lies near the base of the Frostback Mountains.

The Basin is an overgrown wilderness filled with fiercely independent hunters known as Avvar. They settled in the southern mountains of Thedas, spreading their culture across the Basin. An ancient Tevinter ruin lay dormant, hidden away in the Basin in hopes of reawakening a mysterious darkness.

The Jaws of Hakkon are re-formed in the aftermath of the Fifth Blight. Outraged at the Avvar gods for allowing his hold to be devastated by the Darkspawn, and at the lowlanders for refusing to aid the Avvar in their time of need, Gurd Harofsen forswears all of the Avvar gods and seeks out the stolen god, Hakkon. Harofsen molds his surviving kin in the ways of the Hakkonites of old and vows to unleash Hakkon upon the world once and for all.

Throughout history, few have dared explore the Frostback Basin. Ancient Tevinter ruins lie overgrown by thick forest, their purpose here forgotten. Rare expeditions in ages past returned with little information - or did not return at all. The exception is the Avvar, who have long travelled the basin, and, in more recent generations, established a hold along its steep mountain cliffs.

“We have found it. Hakkon himself welcomed us. An ancient Tevinter fortress, sheathed in a wall of ice. It was untouched by lowlanders, who could find no way to breach the walls. Our mages alone, blessed by Silent Hakkon with the gifts of ice, could part the wall for a few heartbeats, giving our people time to climb inside.”―Gurd Harofsen

The reformed Inquisition launches an expedition to the Frostback Basin on the advice of Bram Kenric, a professor from the University of Orlais. Kenric had sent word to the Inquisition in regards to clues that had been discovered regarding the final resting place of the prior Inquisitor that led the Inquisition during the Divine Age. Kendric is tenured in the histories and formation of the last Inquisition; and is eager to uncover new evidence pertaining to Inquisitor Ameridan.

Ameridan's disappearance has remained a mystery to Orlesian scholars including the circumstances surrounding his sudden departure to the Basin. Kendric believes that the Basin contains all the needed clues to piece the enigma back together as the discovery would be beneficial to both academia and to the Inquisition. The Inquisitor rendezvous with Kendric at a newly set up Inquisition Camp established in the Frostback Basin. Kendric discloses that the region is home to two feuding Avvar tribes. Those that are allied with the Inquisition are found in Stone-Bear Hold; while those that are hostile call themselves the Jaws of Hakkon.

During their investigation, the Inquisitor learns that Ameridan came to the Basin on Emperor Drakon I's orders to stop an invasion of the lowlands by the original Jaws of Hakkon. To help them in their endeavor, the Hakkonites had bound the spirit of their god Hakkon Wintersbreath to a high dragon. As Orlais was already facing the Second Blight, a concurrent invasion from the Hakkonites would have proved devastating to the region.

Ameridan's mission proved triumphant as he succeeded in stopping the Hakkonites by binding himself to Hakkon's dragon form. Ameridan froze time itself around the both of them—knowing that they would bound to one another for all eternity.[1]

“The lowland warrior trapped our god in some strange magic the mages cannot understand. They say time is twisted upon itself, like a knot within a knot. They say it may be old Tevinter magic that made it possible... regardless the spirit of Hakkon remains in the dragon, that much is clear. Perhaps we can bring forth Hakkon himself and bind him anew―to another worthy beast.[2]”

The modern-day Hakkonites have found a way to transfer Hakkon to another vessel, and are planning on finishing their predecessors' work of invading the lowlands. The Inquisitor enlists the aid of the Avvar at Stone-Bear Hold to assist with the assault of the Hakkonite fortress. The combined forces allow the Inquisitor to get inside to confront the cults leader, Gurd Harofsen. Though Harofsen is defeated, he successfully manages to complete the ritual, allowing for the massive dragon to break free from the fortress. Coincidentally, Inquisitor Ameridan is freed in the process as the magic that bound the two to one another was shattered.

With the destruction of Ameriden's grasp over Hakkon, the concept of time also returned to Ameriden's mortal form, allowing only a few final moments in his new reality. He discloses the circumstances regarding his mission and gives his blessing to the Inquisitor to finish what he couldn't. The Inquisitor confronts the ice dragon in hopes of finally freeing Hakkon Wintersbreath from centuries of confinement―the Inquisitor can gain access to The Basin by completing the Investigate Frostback Basin war table scouting operation in Skyhold.

Note: The 22 regions below make up the Regions in Frostback collection. Discovering all of them grants 500 Influence.

It Remains to be Seen

Where Once We Walked

An Appeal to the Shaperate

A Conspiracy of Dunces

Too Grizzly To Bear

The following Avvarcentric Skyhold customization items are available for purchase from Trader Helsdim in Stone-Bear Hold:

The following are all obtained by reading a hidden rune in the cave where Gyda Myrdotten is located:

Accuser's Staff - looted from the sarcophagus inside The Mystery of Winter chamber.

Armor of the Dragon Hunter - acquired in The Old Temple upon completing the main quest Ameridan's End if the Inquisitor is a rogue.

Compound Crossbow Arms - looted from a pile of bones located near the Fade-Touched lurker found northwest of the initial starting camp established; see side quest A Father's Name.

and looted from a chest next to the Varsdotten River fast travel marker; see main quest On Ameridan's Trail.

Hakkon's Mercy - looted from a chest inside the west vault at Razikale's Reach upon the correct completion of the floor puzzle; see main quest On Ameridan's Trail.

Hakkon's Valor - acquired upon a second completion in Stone-Bear Hold's arena, after completing the side quest Hakkon's Trials.

Heartstring Bow - looted from a skeleton after opening the Fade rift in The Lady's Rest.

Helm of the Dragon Hunter - looted off the corpse of the Nox Morta in Swamp Kuldsdotten if the Inquisitor is a dwarf, elf or human; see side quest the Nox Morta.

Master Belt of Focus - looted from a pile of bones located near the Fade-Touched lurker found northwest of the initial starting camp established; see side quest A Father's Name.

Master Belt of Grenades - looted from a chest, behind the eastern most locked door, in the Abandoned Jail during the main quest Storvacker Caged.

Master Guard Belt - looted from a corpse dangling on a wall located southwest from the Mystery of Winter temple door.

Masterwork Enchanter Staff Schematic - looted from a nearby corpse after defeating the Fade-Touched spider; see side quest A Father's Name.

Masterwork Grey Warden Shield Schematic - looted from a corpse located in Swamp Kuldsdotten (northwest of the Swampside Inquisition Camp, near the Fade-Touched gurgut); see side quest A Father's Name.

Plate Mail of the Dragon Hunter - acquired in the Old Temple upon completing the main quest Ameridan's End if the Inquisitor is a warrior.

Savage Thorn - looted from the fade rift in Endarsen Pass.

Scepter of Razikale - looted from a chest behind the western most locked door in the Abandoned Jail; see main quest Storvacker Caged.

Skywatcher's Cleaver - looted from a pile of bones located near the Fade-Touched lurker found northwest of the initial starting camp established.

Swift Greataxe - looted upon sealing a rift; see side quest Rift in the Floor.

Vestments of the Dragon Hunter - acquired in The Old Temple upon completing the main quest Ameridan's End if the Inquisitor is a mage.

Vitaar of the Dragon Hunter - looted off the corpse of the Nox Morta in Swamp Kuldsdotten if the Inquisitor is a qunari; see side quest the Nox Morta.

Codex entry: A Celebration Of Wardens

Codex entry: A Letter to Harding

Codex entry: A Tradition of Rebirth

Codex entry: Ameridan and the Mage

Codex entry: At What Cost

Codex entry: From a Mage's Journal

Codex entry: The Hunt of the Fell Wolf

Journal of the Giant Watcher

Letter Found near Many Corpses

Messages Left at the Outpost

Sketches Found in a Meat Shop 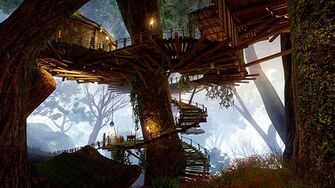 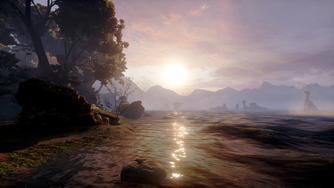 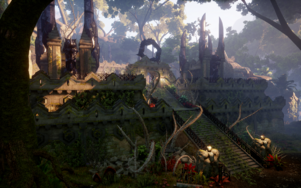 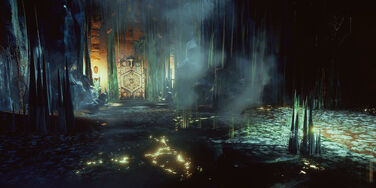 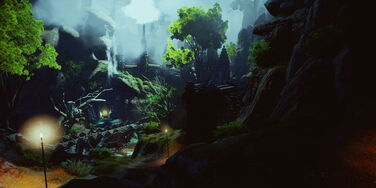 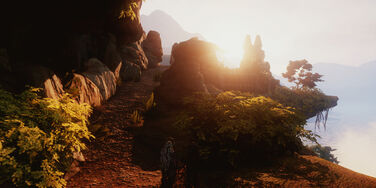 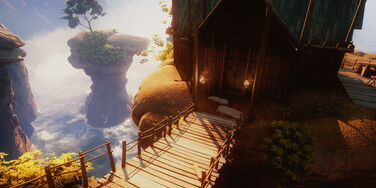 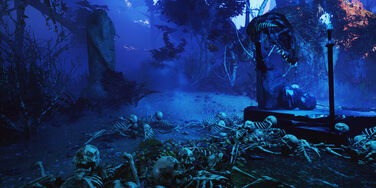 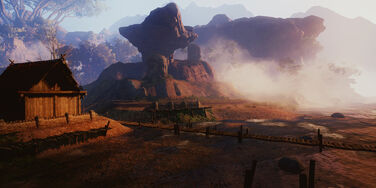 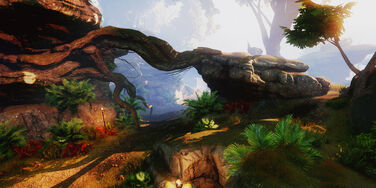 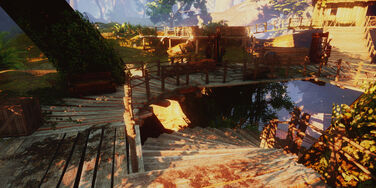 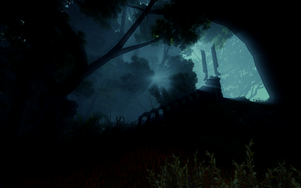 The Basin at night