Freed Are Slaves is a mosaic collection in Dragon Age: Inquisition.

Pieces of an old Tevinter mosaic are scattered across Thedas. If recovered, they could be reassembled.

Triggers when any mosaic piece from this collection is found.

The mosaic pieces are found across Thedas in the following locations; the pieces are numbered to match the reference image:

Note: The pieces found in the Flooded Caves, located underneath Crestwood, are only accessible once the lake has been drained as part of the side quest Still Waters. 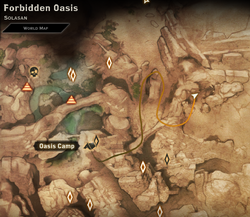