Francesca Invidus (born 9:24 Dragon[1]) is an Altus mage from Ventus.

Francesca is the daughter of Magister Alerio Invidus.[2][3] As a young woman, she showed a strong predilection for plant magic, a talent her father dismissed as better suited to gardeners and groundskeepers. Her brother Florian was supportive of her talent. He considered her one of the most powerful mages he knew.

Francesca encounters Calix Qintara in a tavern. The two engage in a brief flirtation before being interrupted by Magister Aramis. Later, Francesca returns to the tavern with her brother Florian to meet with Calix again. Before they can meet, they are interrupted by 'Magister Aramis' again. Aramis reveals that she is investigating Calix and House Qintara for possible links to the Venatori. While Florian and the magister are distracted, Francesca steals away to speak to Calix. Francesca admits her family was not certain whether Magister Qintara was 'one with the cause' but is now convinced. She proposes House Qintara and House Invidus form an alliance against the Lucerni. To bind the agreement, she gives Calix a gift: a magical focusing stone. However, shortly afterwards, Calix is revealed to actually be an imposter and a con artist and is driven off by Florian and the Invidus household guards, with the focusing gem still in his possession.

Back in the Invidus estate, Florian chastises his sister for losing the gem to Calix. He further tells her that her naivety and lack of strategic thinking is the reason he and their father did not involve her with the Venatori, despite her impressive talents as a mage. Florian assures his sister that he will fix her mistake by taking back the gem and killing the thieves responsible before their father can find out. However, he is killed after confronting two Antivan Crows. Francesca later finds his body in an alley and vows to finish what he started.

She heads to the Qintara estate to warn the Magister against the thieves, only to find out that the Magister has been dead for several years and is being impersonated by his former slave, Gaius. Before Gaius can kill her to keep his secret, Ser Aaron, Vaea and the thieves burst in and save her life. As the qunari invade Ventus and the Qintara estate, Francesca abandons her vengeance against Calix in exchange for safe passage out of the city. She safely escapes with Ser Aaron, Vaea, and Calix. Calix invites her to join their group as they get away from the burning city.

Following the death of her brother and the fall of Ventus, Francesca's perspective has changed. While she used to value beauty, and the power of friendship and alliances, she now believes that the only power that matters is what you can do, and that you must take anything of value.

Since their escape from Ventus, Francesca has remained with Ser Aaron's group in their mission to find Castellum Tenebris and the red-lyrium weapon. While Ser Aaron, Vaea, Marius, and Tessa attack the Qunari pursuing Cedric Marquette, fleeing from Carastes with an artifact he was hired to recover by Magister Danarius, Francesca stays on the sidelines with Calix and Autumn. When Calix finally convinces her to use her magic, she kills the remaining half-dozen Qunari with a single, nature-based spell. He remarks that he's glad she's on their side, but Francesca retorts that she's not, and that she still holds him responsible for the death of her brother. She thanks Ser Aaron for protecting her on the road, and leaves for Fort Viridan.

In Fort Viridan, Francesca meets up with a family friend, only to be told that her father has been abducted by the Blue Wraith. When an elven servant spills wine on her dress, Francesca defends the girl from her family friend's abuse. Wanting to finally prove her value to her father, she resolves to go find him herself, and asks Vaea and Autumn, who'd caught up with her just as she'd reached the fort, for help. More than Autumn's tracking ability, she believes having an elf at her side might help when talking with the Blue Wraith. Vaea, who has a mutual friend with the Blue Wraith, asks that Francesca let her do the talking. She agrees, as long as her father is neither hurt nor in danger. As they notice the corpse of a man with a gaping hole in its chest, the Blue Wraith appears, telling them it was a mistake to come.

Vaea physically interrupts the fight between Fenris and Francesca, and convinces him that they only came to talk. Francesca angrily asks about her father, accompanying her words with a spell that knocks Vaea off her feet but harmlessly passes through Fenris. From her power and use of plant magic, Fenris recognizes her as the Invidus girl. He tells her that he didn’t take her father, but is tracking the man who did. He also says that Magister Invidus is not a man worth saving, but Francesca claims that he's no longer a Venatori.

Fenris refuses their offer of help, saying that he no longer has teammates, and that people only use you as long as they need your power. They use Autumn's tracking skills to follow him to Magister Nenealeus' estate. Francesca says that Fenris was right about people, and that she suspects Vaea is only helping her so she'll join their group in return.

At the estate, Vaea convinces Fenris to investigate before attacking. Fenris questions Francesca's desire to rescue her father, as her father would never do the same for her. She tells him that she's not interested in helping him, only in putting him in her debt, a move Fenris describes as typically Tevinter. He adds that she should embrace being different instead.

They find that the Qunari, led by a Viddasala, have taken the estate, and are interrogating Nenealeus' elven slaves as to his motives and whereabouts. The slave reveals that Nenealeus has secured the assistance of Francesca's father, for his expertise on red lyrium. When the slave reveals that the magister has gone to retrieve a sarcophagus that infuses elves with lyrium, Fenris angrily attacks the Qunari, saying that the sarcophagus was broken beyond repair. Fenris and Francesca kill most of the Qunari, though the Viddasala escapes. Francesca intervenes on behalf of the surviving slaves, saying they're scared enough already when she believes that Fenris is about to question them. He frees them instead, after which a young boy volunteers information on Nenealeus' whereabouts.

With this information, they arrive just in time to help Ser Aaron's group in their fight against more Qunari and unstable test subjects. Francesca and Fenris chase after the caravan to rescue her father. Far from grateful, Magister Invidus tells her that she cost him his chance to restore the Venatori and their family. When he learns of Florian's death, he says that the wrong child died and attacks Francesca. She's forced to kill him to save Fenris, who stepped in to protect her. Vaea comforts her in her grief.

After the battle, Calix tries to return the focusing gem he conned out of her on their first meeting, but she tells him to use it to set himself up in Fort Viridan. She then heals Cassé, Ser Aaron's horse, using plant magic to ease the experience. Ser Aaron expresses his gratitude and says that he always had faith in her. She joins the group as they head towards Tenebris.

On their way to Castellum Tenebris, just outside Neromenian, Tessa inadvertently upsets Francesca when she says that Ser Aaron is like a father to Vaea. Tessa apologizes to Francesca, but she says that Tessa did nothing wrong and that she should be stronger. Tessa replies that nothing could be stronger than standing up against her father to do what she thought was right.

After Tessa finds Tractus Danarius drowning his sorrows in a local tavern by scouting around town, Francesca acts as a lookout while Fenris, Vaea, and Autumn interrogate the magister to find a way into his fortress. After obtaining the information, and as the Qunari invade the city, she heads towards Tenebris with the rest of the group, leaving Tractus alive but tied up in his room.

Thanks to Vaea's acrobatic skills, the group is able to infiltrate the castle and make their way to its courtyard, where the ritual to empower Shirallas with red lyrium will take place. However, they find heavier resistance than they'd expected: in addition to Nenealeus, Cedric Marquette, Shirallas, and the Venatori, the courtyard is also defended by a high dragon. The group's attempt to stop the ritual is further disrupted when the Qunari start subjecting the castle to heavy bombardment. Ultimately, though Francesca is able to slow Shirallas down, he manages to enter the sarcophagus and emerges from it covered in red lyrium markings. Francesca is initially able to ensnare Shirallas with her plant magic, but he quickly breaks free of her restraints. While Ser Aaron and Fenris deal with the Red Wraith, she turns her focus towards the dragon and ensnares it as well. Ultimately, Vaea convinces Francesca to let the dragon simply fly away from the battle and directs her to use her magic to bury the sarcophagus deep underground.

After Ser Aaron dies of the injuries he sustained during his duel with Shirallas, Francesca offers to accompany Vaea to Ferelden to return his remains to his native Portsmouth. Autumn and Fenris accompany them as well. 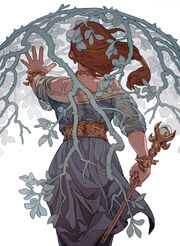 Francesca on the cover of the third issue of Dragon Age: Blue Wraith 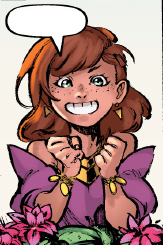 Francesca as a young woman