Visit Discussions
Forums: Index > Wiki Discussion > Discussions Scripts & Aesthetics
Note: This topic has been unedited for 485 days. It is considered archived - the discussion is over. Do not continue it unless it really needs a response.
This Discussions is an extension of this post.

So, what I am proposing is the sitewide use of any number of scripts developed on the Fandom Developers Wiki intended increase the visibility of Discussions, make Discussions Moderation easier, & make interaction with the newest generation of Discussions-only users more bearable. Beyond that, I propose a couple aesthetic alterations.

First, is a script authored by one of my fellow Vanguards, which includes a feed of the latest Discussion posts in the right rail. The purpose of this would be to increase traffic to Discussions, & foster more interaction between editors & Discussions users. An example configuration can be seen below: 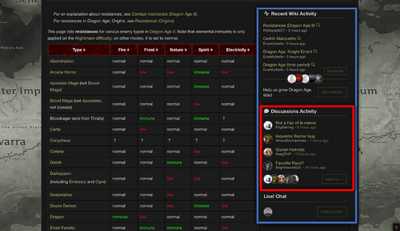 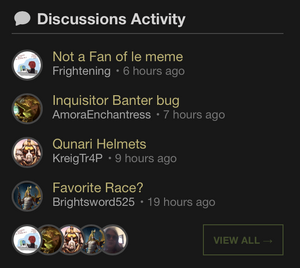 Panned out
Up close
Second is a script authored by Flightmare, & what it does is transclude the Community App Bios onto user-pages that do not exist (i.e. those of users who have only interacted with the wiki via Discussions). It is useful to more easily allow non-App (Desktop) users to get to know the Discussions users with whom they may be interacting. An example is below: 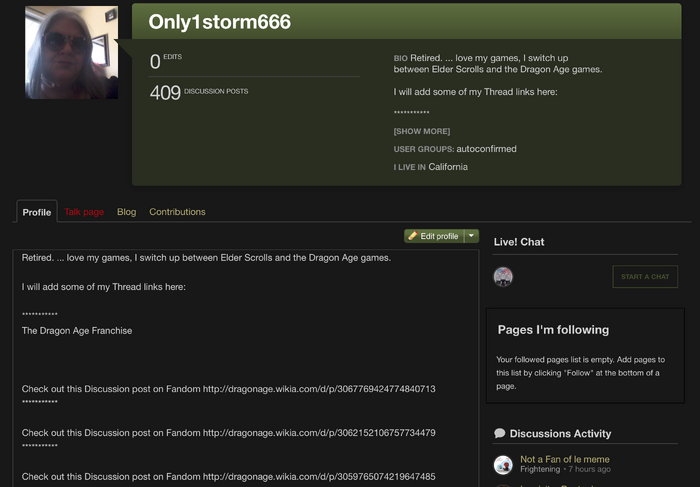 Third, & perhaps least important, is a tool designed to make moderation of Discussions easier. Also by Flightmare, & supported by FANDOM, is the DiscussionsFeed script. What it does is turn Special:DiscussionsFeed into a moderation feed wherein moderators (or normal users if they wanted to use it as a news source) can keep up to date with new discussions. As before, an example is below: 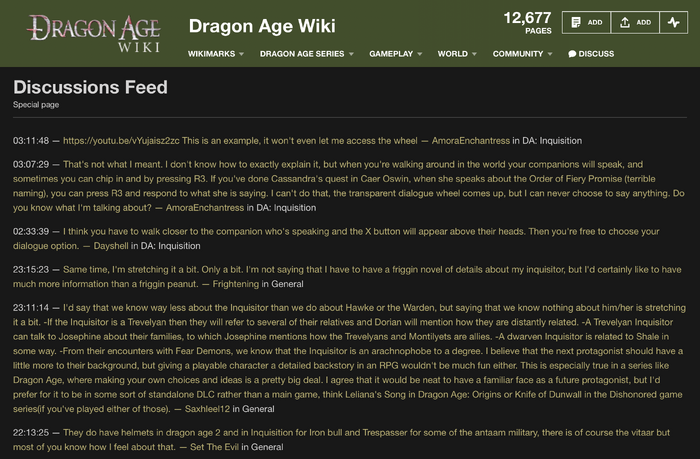 Lastly in the department of Discussions visibility, the inclusion of a Discussions Activity Feed (different than the above) on the Main Page, such as can be seen here, would further increase visibility. As seen in the link before, it can be heavily customized with CSS, & it does not require external extensions to work; it is enabled on all FANDOM Wikis by default. Here is one last example of what can be done with it:

All that said, I don’t expect all or even most of these scripts to be installed, these are just my recommendations. In point of fact, it would probably most ideal if any of the first three scripts were made into Gadgets that were enabled by default; that way, the visibility & tools would be available, but for those who did not want to see them, they would be able to disable the Gadgets in Special:Preferences.

Finally, while I believe the idea of a Header Graphic has been rejected, the Community Page, which is prominently linked in the Top Navigation, has a bland, default banner, & I think it could use a Dragon Age themed image. If that idea sounds good, Help:Community Page has details about it. I was told that a community vote for any of these proposals would have to take place, but as I do not know how this Wiki carries out its votes (& because I think it would be presumptuous of me) I have simply laid out these recommendations, & everyone can make of them what they would.

Big kudos. I started using one of the extensions. I think as a Wiki we should transition complete onto Discussions and add the extensions into the wiki code. It's obvious that the forums are no longer preferred by fellow DA wiki members.

Retrieved from "https://dragonage.fandom.com/wiki/Forum:Discussions_Scripts_%26_Aesthetics?oldid=814431"
Community content is available under CC-BY-SA unless otherwise noted.