Fort Drakon is an ancient fortress that predates the city of Denerim and is both the oldest and the tallest structure in the city.

The location of Fort Drakon was originally an outpost of the Tevinter Imperium. The Imperium's mages built a tower rising out of a mountain to symbolize its power. The city of Denerim was built around the tower, and after the Imperium lost control of the region, it passed through the control of different teyrns who ruled the area. The city's population could retreat into the fort if it was threatened. Eventually Fort Drakon settled under the command of the Arl of Denerim. It is now used as a garrison for Denerim’s city guard as well as a prison. Its current name comes from Emperor Drakon, First Emperor of Orlais.[1]

The Orlesian usurper King Meghren and his supporters barricaded themselves within Fort Drakon at the climax of the Fereldan Rebellion in 9:2 Dragon, after Denerim fell to the rebels. Meghren held out for six days within the Fort before Maric Theirin challenged him to a duel. Maric and Meghren dueled on the rooftop. Maric won and decapitated Meghren and placed his head on a pike outside the Royal Palace like the latter did to Moira Theirin, Maric's mother.

In 9:31 Dragon during the Fifth Blight, Fort Drakon plays a significant part in the Warden's journey.

If the Warden is captured during Rescue the Queen, the Warden must either break out of prison or wait while two (player-selected) allies to perform a daring rescue mission.

This section contains spoilers for:
Darkspawn Chronicles.
The rooftop of Fort Drakon is the setting for the final battle against Alistair and his companions. The Hurlock vanguard is commanded to save the Archdemon and kill the last surviving Grey Warden to ensure the Blight's success.

The Battle at Fort Drakon

Note: With high enough Coercion or Cunning, Stealth, and Stealing, the Warden can escape the prison and pass through all the guards without engaging in combat. See Escape from Fort Drakon for details. 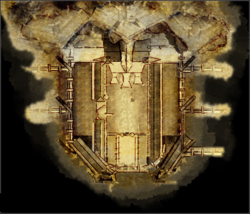 Map of the Fort's Entrance 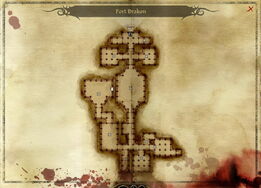 Map of the Main Floor 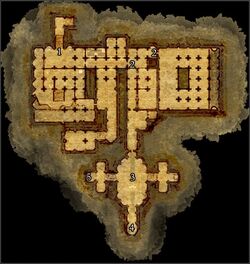 Map of the Second Floor 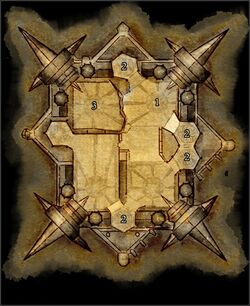 Map of the Rooftop