The Flooded Caves are an extensive cavern complex located beneath Old Crestwood; the former village in the Crestwood region. The grottoes run so deep into the ground that they intersect with an ancient dwarven outpost adjacent to the Deep Roads. This Lost Outpost is part of ancient roadway found in the deepest section of the Flooded Caves.

The construction of the roadway was mandated via a Royal decree from King Kelgak to link the Great Thaig of Aeducan with the Soaring Thaig of Gundaar. Midway between the roads connecting the two thaigs is a grand hall dedicated to Paragon Hekkat, whom discovered the Principles of Nature. His research allowed for dwarven architecture to reach unheard-of heights and astounding breadths.[1]

Whilst one exit emerges directly to the surface leading out to Crestwood's East Side Hills, the other can be traversed by going through the multiple cavern tiers and a partially accessible deep roads ruin that eventually exits out to Old Crestwood. According to Crestwood's Mayor, the official statement in 9:41 Dragon was that the caves' most recent use was during the Fifth Blight; in which refugees took shelter fleeing from the darkspawn. Subsequently the darkspawn broke into Caer Bronach, wrecked the controls for the area's dam, thus ultimately flooding both Old Crestwood and the adjoining caves.

“29th of Cloudreach, 9:30 Grace has a cough. All well and good to "help those running from the Blight," but if my daughter catches something from these refugees, I'll have the mayor's hide. At least Dedrick moved them into the caves. I thought they'd put up a fuss, but they went, quiet and pale as the dead. The healthy ones were relieved. Said their sick friends seemed to get worse in the daylight. Maker save us from a plague.”―excerpt from a mildewed diary

The village was hit hard by the darkspawn during the Fifth Blight. Many refugees tried to find shelter in Crestwood, however some of them were carrying the blight disease and were infecting others. The diseased were moved to the caves beneath the town. On the 8th of Bloomingtide 9:30 the invading darkspawn finally arrived and surrounded most of the valley the village is in. Mayor Gregory Dedrick decided to open the dam and flood the village, killing the darkspawn, and any remaining villagers inside, to save the lives of everyone else.

A Fade rift opens in the caves resulting in demons crossing the Veil from the Fade possessing the various corpses left from the Blight, and creating a swarm of undead who lay siege to the Village of Crestwood. The Inquisition moves into the area to protect the settlement and raid the caves to seal the rift.

In the process clues can be found that tell another story about what happened in Old Crestwood during the Fifth Blight, and after the waters have been stilled, Crestwood's mayor confesses his involvement. The Mayor discloses that he is the person responsible for the flooding of Old Credtwood during the Blight, but strictly with the intention of saving the remaining healthy inhabitants from the darkspawn and from the taint of those already infected.[2]

Freed Are Slaves (piece #1) - found in the adjacent chamber to the rift (bash the destructible head down the ladder).

Freed Are Slaves (piece #2) - found on a stone table next to the dwarven statue located in the chamber across from the rift.

Freed Are Slaves (piece #3) - found on a wooden table situated near the cave's exit leading back to East Side Hills region of Crestwood. 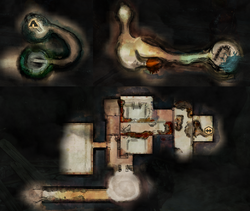 Map of the levels 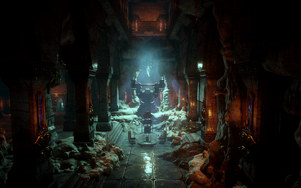 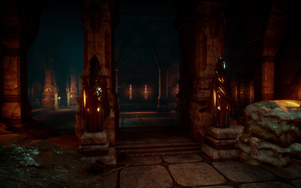 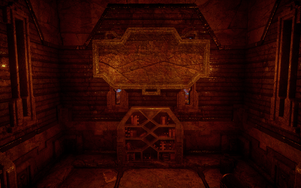