The caster's hands erupt with a cone of flame, inflicting fire damage on all targets in the area for a short time. Friendly fire possible.

Flame Blast is a mage spell from the Primal tree in Dragon Age: Origins. 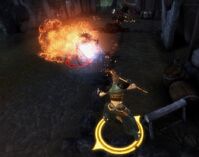