“I came to the Circle from the Grey Wardens because I saw something had to be done. In the Wardens, we learn to watch for our moment and seize it—and that moment is now.”

Fiona is an elven mage from Orlais. Formerly a Grey Warden, she was elected Grand Enchanter of the Circle of Magi in 9:38 Dragon.

Fiona grew up in an alienage in Orlais until her father died and she was orphaned and forced by circumstance to stay with a group of slavers who would later sell her. As a child of seven, she was bought as a slave by Count (now styled Comte) Dorian, who kept her as a "pet." She was sexually and physically abused. When she was fourteen, she attempted to escape when an elderly mage took notice of her. Unfortunately, the Count heard of her attempts and forcibly began whipping her. That same night she discovered her magical talents and used them to kill the Count, an act that nearly killed her the first time she used magic. Instead of leaving her to die or summoning the city guard, the Count's widow sent her to the Circle of Magi outside of Montsimmard.[2] There, she was recruited into the Grey Wardens by Commander Genevieve after Fiona begged to be allowed to join. Fiona also saw fellow recruits Duncan and Riordan through their Joining.

Fiona was an elven mage and member of the Grey Warden detachment led by Commander Genevieve, heavily relied on for her offensive and healing magic. During their trip in the Deep Roads in 9:10 Dragon, she became close to Duncan as they were the youngest of the party. The two often shared secrets together.

Her initial relationship with King Maric Theirin was intense and uncomfortable, as her childhood experiences had left her distrustful of the nobility. After the party's imprisonment in the Fade at the hands of a demon while they were in Ortan Thaig, and their eventual escape, the two became lovers.

Fiona was the strongest objector to Bregan and Genevieve's plan to work with the Architect, against Utha who willingly agreed, Duncan's indecision, and Kell ap Morgan's uncertainty, because she believed darkspawn were evil by their very nature and that assisting them could bring only misery. Eventually she managed to escape from Kul-Baras along with Duncan and Maric. However once they reached the surface, they were captured by First Enchanter Remille who had taken over the Kinloch Hold and allied himself with the Architect. They manage to defeat them, but the Architect was able to escape along with Utha.

Months later, following a recall to Weisshaupt to debrief the other Wardens about the Architect, Fiona traveled to Denerim with Duncan to meet with King Maric. Fiona explained that she was called to Weisshaupt to lead a search for the Architect, while Duncan was stationed to Ferelden as second-in-command. But the true reason for Fiona's journey had been to reveal to Maric that she had his child,[1] and to exact a promise from Maric that their son would be told his mother was a human and had died, while Duncan promised to watch over him.

Fiona said she "might be the first Warden who does not have to go on the Calling."

By 9:37 Dragon, Fiona had been removed from the Grey Warden order. According to Fiona in Dragon Age: Inquisition she was made to leave when it became clear she could not again undertake the Joining after she was cured of the taint during the events of Dragon Age: The Calling. The animosity toward her by fellow Wardens who felt she cheated death had also become too difficult to bear and she realized she could do more good in the Circle.[3] She returned to the Circle, ascending to the role of First Enchanter of the Montsimmard Circle[4] before being elected Grand Enchanter—effectively the leader of the Circle of Magi.

During a conclave in 9:38 Dragon, she called for a vote on whether to separate the Circle of Magi from the Chantry. Her move was thwarted by Wynne, who successfully convinced the Circle to err on the side of caution. The templars responded to the attempt by disbanding the College of Enchanters.

Over a year later, a new Conclave was arranged at the behest of Divine Justinia V to investigate the Rite of Tranquility and possibly enable a peace between templars and mages. Fiona was present at the Conclave and took another opportunity to once again call for the Circle of Magi to separate. This time, actions undertaken by her Libertarian Fraternity ensured that tensions with the templars would be even more inflamed and as a result, Lord Seeker Lambert called the entire conclave to be in treason before the vote could be had. After a swift battle, Fiona was captured along with a number of fellow First Enchanters and other mages. They were freed and the mages gathered at Andoral's Reach. There, Fiona called yet another vote for separation and this time got the result she desired, thus officially beginning the Mage-Templar War.

When the Divine managed to convince both mages and templars to convene for peace talks at the Temple of Sacred Ashes, Fiona sent intermediaries in her place, suspecting a trap. Lord Seeker Lucius did the same. After the explosion that created the Breach killed all the dignitaries of the Chantry's peace conclave, the Mage-Templar War resumed and rebel mages were once again subject to the templars' brutality. Fiona led her followers to Ferelden where the monarch granted them refuge in Redcliffe.

The Herald encounters Fiona in Val Royeaux at the Summer Bazaar, following the debacle involving the Chantry's denouncement of their title as the Herald of Andraste and the templars' refusal to return to the Chantry. Fiona asks that the Herald come to the Gull and Lantern Tavern in Redcliffe to discuss a possible alliance. She suspects the templars to be the cause of the explosion at the conclave.

Should the Inquisitor choose to meet with Fiona, strangely, she claims to not have met them; hinting the person they met was an impostor or more likely because of the time travel magic that's been observed outside of Redcliffe affecting her personal timeline. Though Fiona says she has a strange feeling at the mention of their supposed meeting, regardless of whether it really occurred, their present circumstances have changed. Fiona then reveals that she feared her peoples' annihilation and had relinquished her role as Grand Enchanter after trading the rebel mages' services to the Tevinter Imperium in desperation. A magister named Gereon Alexius is the rebel mages' handler, as the rebel mages are considered indentured since they require ten years of service to be considered an Imperial citizen. To Fiona's dismay, Alexius reveals that he intends to change the terms of their agreement and conscript all the rebel mages into military service under his command.

If the mages are recruited:
Fiona is present in the Castle Redcliffe throne room during the negotiation between Alexius and the Inquisition. In the resulting altercation, in which the Herald and Dorian are accidentally transported a year into the future, in which their absence has resulted in the growth of the Breach, they find an imprisoned Fiona, who has red lyrium growing out of her lower body; she explains that proximity to red lyrium slowly transforms her into that substance for the Venatori to mine. When the two return to the present and capture Alexius, the Fereldan monarch(s) (Alistair and/or Anora, depending on who was made sovereign) arrive and order the rebel mages to leave Ferelden. The Herald can then either take the mages on as allies or conscripts.

When the Inquisition takes residence in Skyhold, the Inquisitor can converse with Fiona. She inquires about Alistair, without revealing that he is her son. Fiona will also assist personally in the battle at the Arbor Wilds, leading a band of mages into battle against the Red Templars.

If Leliana or Cassandra becomes Divine and the mages are recruited as full allies:
Fiona reforms the College of Enchanters as a new order to instruct mages in the use of magic.

If Cassandra becomes Divine and the mages are recruited as conscripts:
Fiona and her followers agree to return to the re-instated Circle of Magi peacefully although she forms a new College within the Circle called the Bright Hand, advocating for reform and close ties with the Inquisition, which soon becomes the dominant force of Circle politics.

If the Templars are recruited instead:
Fiona and her compatriots join forces with the Venatori out of desperation and help them attack Haven, in which the Herald is forced to fight her. Fiona leads the final wave to kill the Herald personally at the upper trebuchet, and the Herald's team engages her and a number of Venatori in a pitched battle. Fiona is unsuccessful in stopping the Herald and is killed.

In Your Heart Shall Burn (conditional)

(If Alistair is a Grey Warden)

Codex entry: Longbow of the Avvars 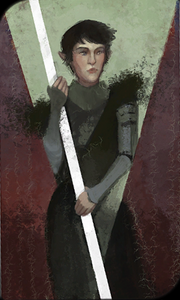 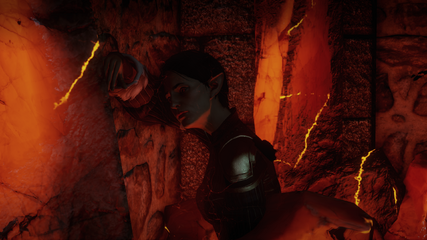 Fiona being turned into Red lyrium during In Hushed Whispers. 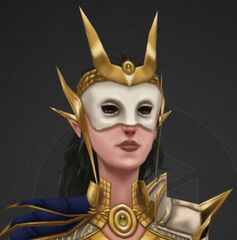 A portrait of Fiona from Heroes of Dragon Age 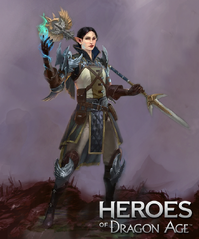 Artwork of Grey Warden Fiona from Heroes of Dragon Age.

Tier progression of Fiona in Heroes of Dragon Age 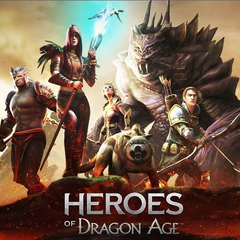