Edit
watch 02:05
Wiki Targeted (Games)
Do you like this video?
Play Sound
“Do you ever wish you could have the freedom to piss anywhere you wanted without being stared at?”

In Search of Morrigan
The History of Cad'halash

Finn is a human mage specializing in healing magic and one of the three companions in the Witch Hunt DLC of Dragon Age: Origins. His full name is Florian Phineas Horatio Aldebrant, Esquire. He shortened it because the other mages kept calling him "Flora".

Finn is a young mage from the Circle of Magi in Ferelden. His parents are Magistrate Kingston Aldebrant of West Hill and his wife Florence.[1] He considers himself the Circle's best linguist and foremost expert on ancient Tevinter history–even if others might consider him more of a bookworm, a recluse that spends all of his time in the tower's dark library. Finn is the unlikeliest of adventurers but it may come to pass that his academic expertise will force him out of the library and into an adventure where his arcane might is the only thing that stands between him and certain death. Unlike most other mages of the circle who have no contact with their families, Finn actually has a very close relationship with his parents.

The Warden-Commander first meets Finn at the Circle Tower while searching for clues regarding the book that Morrigan stole from Ariane's Dalish clan. After the Warden discovers the term Eluvian which has to do something with Morrigan, Finn approaches them revealing that "Eluvian" is a magical elven mirror. He says that the Tevinter mages tried to activate the full power of the Eluvian after they captured them from Arlathan, but only managed to use them as communications portals. He believes that it is possible to locate an Eluvian using the shards of the broken Eluvian at the Elven Ruin which the Sabrae Clan encountered though he does not know how. He suggests asking the only known "survivor" of that age of history, and joins the party.

The "survivor" is an ancient Tevinter statue containing the spirit of a prophetess, Eleni Zinovia, which is stored in the basement of the Circle Tower. The statue tells Finn that he requires the shards of a broken Eluvian, as well as the Lights of Arlathan, in order to locate a working Eluvian. Zinovia also remarks that she and Finn will not speak again.

While retrieving the lights from Cadash Thaig, he will ask for Ariane's blood to locate them. If the Warden is elvish, he states that Warden blood is different from pure Dalish blood, likely due to the presence of Darkspawn taint. When asked if what he is doing constitutes blood magic, Finn states that it is a gray area as the spell's power does not come from the blood, but nevertheless they should keep this incident to themselves. When the shards and lights are in possession of the party, Finn performs a scrying ritual and locates a working Eluvian in the Dragonbone Wastes.

In the Dragonbone Wastes Finn is excited by the discovery of the working Eluvian but has to stay back with Ariane and observe the final encounter between the Warden and Morrigan.
This section contains spoilers for:
Dragon Age: Inquisition.

After accomplishing their mission, Finn did not return to the Circle and instead continued to travel with Ariane. Eventually some mercenaries hired by his father tracked down the duo but were driven off, later reporting to Finn's parents that "I say with some certainity that Finn is no longer the soft, nervous boy you remember."

Finn later returned to his parents' house with Ariane in tow to explain himself and say goodbye, returning his Ghastly Hat and immaculately clean robes.[1]

In Search of Morrigan

Note: Finn's Combat Tactics are preset at master level even though he does not meet the requirements (Cunning should be 16, his however is set at 12).

Note: All of Finn's initial gear is restricted solely to him. 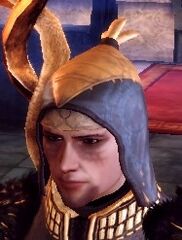