Finding Nathaniel is an Act 3 secondary quest in Dragon Age II. Hawke goes to the Deep Roads in search of Nathaniel Howe at the request of his sister, who fears for his life.

This quest is available if the pre-built "The Martyr" or "No Compromise" background was chosen, or if a Dragon Age: Origins - Awakening import is used in which Nathaniel has joined the Grey Wardens and his Awakening codex entry does not say that he died.

This quest is mutually exclusive with Fool's Gold. You will get one or the other depending on the background chosen/imported. You cannot get both quests within a single playthrough.

In Act 3 you find Delilah Howe near the Chanter's Board in front of the Chantry in Hightown. She will plead with Hawke to find her brother Nathaniel Howe, who has been retracing the steps of Bartrand's expedition into the Deep Roads with his fellow Grey Wardens. Nathaniel did not tell her why the Wardens were retracing the route and he has been gone too long. She would have contacted Vigil's Keep for aid but feared Nathaniel would be dead by the time she reached Amaranthine.

If Anders is in the party he will remember Nathaniel and jokingly say "I wonder if Nathaniel ever found a sense of humor." Anders will discuss some of his history with Nathaniel if Hawke inquires. Agreeing to help Delilah results in

Anders: rivalry (+5) but the quest is accepted anyway.

Once the quest has been accepted, access the Deep Roads from the world map.

Hawke's party enters into a small empty room which leads to another empty room. The third room has a chest containing Vestments of Sacrifice. You will find Nathaniel battling a group of Hurlocks and Hurlock Bolters in the cavern just outside.

If Anders is present Nathaniel will remember him with fondness.

Hawke will have the opportunity to question Nathaniel about his purpose in the expedition. Nathaniel was separated from his fellow Wardens during an attack and fears for their safety. He reveals that the Wardens were investigating because Hawke's expedition went farther into the Deep Roads than anyone believed possible. The First Warden ordered the investigation and offered Nathaniel a generous share of the salvage plus extra coin up front to discourage curiosity. If the Architect was spared by the Warden-Commander during the events of the Amaranthine conflict in Awakening, Nathaniel will discuss it with Hawke: "After the Warden-Commander spared the Architect, we thought the ensuing struggle among the Darkspawn might make the Deep Roads safer. The Wardens' allies assured us these tunnels would still be mostly clear, but it seems they were wrong."[1] He will also reveal that the Wardens learned of the location from Bartrand. It was deemed too risky to contact Hawke or Varric about the expedition for fear that they might return if they learned about the Wardens' interest in the thaig.

You agree to help Nathaniel find the other Wardens:

After saving him, Nathaniel will accompany Hawke deeper into the tunnels to search for his friends.

In the cavern past Nathaniel's location are a group of Hurlock Bolters. A Pile of Bones and Rubble can be looted here.

An Ogre will approach from deeper in the chamber, along with Hurlock Bolters and Hurlocks. Draw the Ogre and other darkspawn into the narrow passage close to the explosives so that the Ogre cannot charge and pull the lever to eliminate them. At the very least the explosive should inflict knockdown on the ogre, one of the few times in the game that they can be knocked down. The Ogre yields a randomized amount of

As you continue down into the lower level:

During the final battle, waves of darkspawn will attack from the west, east, and north: Hurlock Bolters and Hurlocks as well as three Ogres. Three Ogres appear one at a time, one from each direction, with one hiding in the smaller room off the main chamber. Three levers control explosives in each of their respective directions. For the most effective way to complete this battle, use the explosives only when an Ogre is near a barrel in that direction to knock it down long enough to deal serious damage. Note: the explosives cause friendly fire. Other than this, let enemy attention fall on Nathaniel, as he's invincible.

After the battle Nathaniel will give you The Bringer of Silence. He (and your Grey Warden sibling, if present) will bid you and your party farewell. A Dwarven Battle Helmet can be looted from an Ogre, Wardwall and Drakeskin Leg Straps from a chest to the north, and Aurvar's Prize can be found in a Chest right before the exit. Exit the Deep Roads to the west.

Nathaniel will assist in the fight against Meredith during The Last Straw. Note that there are specific conditions for his appearance; see the quest's walkthrough for details.

Bethany Hawke will be present if she joined the Wardens 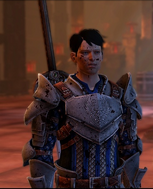 Carver Hawke will be present if he joined the Wardens