Ferelden is a kingdom in southeastern Thedas. It was conquered by Orlais a century ago, when King Darlan ruled, but was freed through the efforts of King Maric Theirin, grandson of King Brandel. Maric's son, King Cailan Theirin, is the ruler as of the start of Dragon Age: Origins.

The climate of Ferelden appears to be temperate, and Ferelden along with Thedas itself is located in the southern hemisphere.

Dividing Ferelden from Orlais to the west are the Frostback Mountains. The southeast holds the Brecilian Forest, where the Dalish elves can be found. To the far south are the forbidding forests, swamps and eventually tundra of the Korcari Wilds. To the north of the Wilds lie the Southron Hills and the Hinterlands. The central region of Ferelden contains Lake Calenhad and The Bannorn. In the far northern region are The Coastlands, which include more swamps and forests. 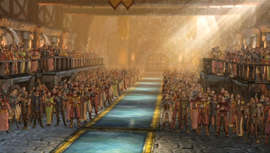 Ferelden is a relatively temperate nation in the far southeast of Thedas, historically populated by a simple militaristic culture that has only begun to "civilize" in the last few centuries. The Andrastian Chantry now claims the hearts and minds of 90% of the population[1]. Fereldan cities are considered virtually anarchic by the standards of most outsiders. The Fereldan desire for freedom has engendered a cultural mistrust of law enforcement, and 'laissez-faire' attitudes in general. While the worst offenses are quickly put down, many others are ignored and citizens are often left to make their own justice. Petty theft is common, as guardsmen will only go out of their way to deal with serious disruptions. Commerce is given little official scrutiny as long as taxes are paid; businesses such as brothels and gambling halls are not only tolerated, but expected.[6]

In Ferelden, only nobles are known to have last names, such as the Howes or the Couslands. Other Fereldan citizens who posses a surname are either foreigners or descendants of foreigners, such as surface dwarves, Dalish elves and city elves. Otherwise, Fereldans introduce themselves with a reference to the area they come from, e.g. Gareth of Oswin. [7]

Like many countries in Thedas, Ferelden has a large population of elves who are segregated from the rest of society and live in walled-off alienages. Those who do not find positions of service outside of the alienage are unable to achieve high-paying jobs, but most seem to feel that they are at least among family who look out for each other.

Visitors and travelers to Ferelden are often curious about local attitudes toward dogs. Throughout Thedas dogs are employed in hunting game, keeping barns and storehouses free of vermin, herding livestock and guarding homes; in the mountains they may even be used as beasts of burden. Fereldans, however, show a particular appreciation for canine companions. The origin of this is tangled up in mythology.

Hafter, the first Fereldan to be named teyrn, was the hero who united the Alamarri to drive back the darkspawn of the Second Blight. He was also reputed to be the son of a werewolf. Whether this reputation was merely a comment on his temperament, or perhaps making a legend larger than life, is unknown - but more than half the noble families of Ferelden claim to be his descendants. Thus many Fereldans believe a wolf's blood still runs in their veins, and it is, after all, only good manners to be polite to one's cousins.

To its neighbors, Ferelden seems utterly chaotic. Unlike other monarchies, power does not reside exclusively with the throne. Rather, it arises from the support of the freeholders.

The Landsmeet is a council of the Fereldan noble class which has been held annually for three millennia (only occasionally interrupted by war, occupation, or Blight). It functions as an official legislative body for Ferelden, and can override the king on any matter of law (although its members tend not to exercise this privilege if the king is particularly popular or powerful).[8] During the Landsmeet the current monarch is expected to mingle with and curry favor from her/his vassals.

An important milestone in the history of the Landsmeet, and of Ferelden itself, was that of the 33rd year of the Exalted Age. After mysteriously gaining the support of the Circle of Magi, Calenhad Theirin marched on and seized Redcliffe, thus forcing a Landsmeet at which the nobles unanimously submitted to his kingship. This marked the birth of modern-day Ferelden and began the Theirin dynasty that was uninterrupted until the Orlesian invasion.

All nobility may be referred to as 'lordship/ladyship' or 'my lord/lady' when not using their official title.

The term for any land-owner in Ferelden. A few commoners are freeholders.

A male or female knight of the realm. Also commonly used as a polite term of address to and by those of equal or greater status than oneself.

Each freehold chooses the bann or arl to whom it pays allegiance. Typically, this choice is made based on proximity of the freehold to the lord's castle, as it's rarely worthwhile to pay for the upkeep of soldiers who will arrive at your land too late to defend it. For the most part, each generation of freeholders casts its lot with the same bann as the previous generation did, but things can and do change. No formal oaths are sworn, and it is not unheard of, especially in the prickly central Bannorn, for banns to court freeholders away from their neighbors - a practice tending to ignite feuds that can last for ages.

This section contains spoilers for:
Dragon Age: Origins.
If a City Elf Warden survives slaying the Archdemon, a new bann may be created, for the first time ever giving an Alienage (Denerim's) representation at the Landsmeet.

As of the Battle of Ostagar, the ruling banns are:

Banns whose exact lands are not yet known:

The teyrns at some point established arlings, giving them command of strategic fortresses that the teyrns could not oversee directly. They are more prestigious than banns, but (with the known exceptions of Amaranthine and South Reach) they traditionally have no banns sworn to them.

Before the Battle of Ostagar, the five known arlings in Ferelden and their lords are:

In antiquity, teyrns arose from among the banns, having grown powerful enough to move lesser banns to swear fealty to them. There were more than a few teyrns throughout Ferelden in the days before King Calenhad, but he whittled them down to only two: Gwaren in the south and Highever in the north. These teyrns are still owed fealty by arl and bann vassals, whom they may call upon in the event of war or disaster, but to whom they are also responsible for lending aid when needed.

The proper address is "your Grace," a form imported by the Orlesians.

The title is likely analogous to the 'real-world' Anglo-Saxon "earl" and Scandinavian "jarl".

The king is the most powerful of the teyrns. Although Denerim was originally the official "teyrnir of the king", it has since been changed to a separate noble's arling, as the king's domain is all of Ferelden. However, even the monarch's power must derive from support throughout the Bannorn.

This is especially evident during the Landsmeet, an annual council for which the nobles of Ferelden gather. It has been held for almost three thousand years, with only a few interruptions for Blights and invasions. The sight of a king asking for, and working to win the support of, "lesser" nobles is a source of constant wonder to foreign ambassadors.

A king or queen is referred to as "your Majesty", while a prince or princess (designated heir(s) of the monarch) is called "your Highness."

The titles ser, bann, and teyrn originate in Ferelden. Calenhad, the first teyrn to unite the Clayne tribes into a single nation, borrowed arl and king from neighboring states.

Fereldans are mostly patrilineal, but there's no firm rule that dictates who rules the household. Fereldans are willful and their families tend to be managed by whoever can. Usually, the oldest child inherits the majority of the property regardless of gender, but there are some cases where a younger brother or sister is named the heir simply because he or she seems more capable. The Human Noble, for instance, is rumored to be a strong contender to be the next Teyrn of Highever, despite the presence of an elder male sibling.

Note: Although the entrance to the Kingdom of Orzammar is within Ferelden's borders it is not part of Ferelden and so dwarves from Orzammar are not considered Fereldans.

"Ser" is likely based on the real life English honorific "Sir," which is bestowed upon male British knights. Unlike real life, where it is also used politely to address men, it is used in-game to address both sexes (this also means there is one less piece of voice-recording for the actors and less circumstantial programming). It has previously been used with the same meaning in George R. R. Martin's A Song of Ice and Fire.

"Bann" is likely based on the real world title "Ban," meaning "lord" or "master," which was used in Hungary and Croatia during the Middle Ages. Bann also equates realistically with the status of the similar term "Baron".

"Arl" is most likely based on the real world British title "Earl," from the original Anglo-Saxon title. The Old Norse equivalent is "Jarl" (the j is pronounced as a y).
"Teyrn" is also an actual real world title, being the Welsh for "Sovereign" or "Monarch".

Retrieved from "https://dragonage.fandom.com/wiki/Ferelden?oldid=477620"
Community content is available under CC-BY-SA unless otherwise noted.