The Fereldan Frostback is one of the ten high dragons encountered in Dragon Age: Inquisition. It can be found in Lady Shayna's Valley; the northeast area of the Hinterlands, closest to the Dusklight Camp.

The Fereldan Frostback is a variant of High Dragon that is native to the Frostback Mountains. Even when compared to other High Dragons, Frostbacks are viciously territorial. They often claim a large swath of territory where their numerous offspring are allowed to roam, under the protection of their mother.[1]

The Fereldan Frostback is resistant to fire, but vulnerable to cold. She is immune to all debilitating effects. It is recommended to face this dragon at levels 10 to 13 using a warrior, a rogue dual wielding daggers and either two mages or one mage and one rogue archer. All party members should have fire-resistant armor and dragon-slaying or frost weapon runes. Equipping fire resistance tonics may also help.

Despite being the first dragon most players encounter, the Fereldan Frostback can be quite difficult even for players who over-level themselves before the fight. This is mostly due to her controlling the terrain of the battle as well as calling dragonlings to aid her, the latter often swarming the players.

There are four stages of the combat:

Note: You can skip this stage altogether by running through Lady Shayna's Valley into the Blood Cliffs.
Note: If you manage to deal enough damage at around the 75% point, e.g. with an archer dealing critical Long Shot or Full Draw damage with a powerful bow, then she will not take off or summon any dragonlings and will remain on the ground for the duration of the fight. It may help to target her head, as enough damage there will interrupt her attacks and make her forget what she was doing for a moment.

The Fereldan Frostback can easily be cheesed to death by a mage standing at the entrance to the Blood Cliffs at maximum engagement distance, using a frost staff along with the storm spell Energy Barrage to attack while she sits too far away to attack you. This exploit is due to staves and spells having essentially unlimited range and perfect accuracy. This will take some time depending on your level and you'll need to adjust your character since energy barrage will move them forward a little bit each time. Due to the distance, however, she won't fight back, and your allies will continually reset back up next to you, preventing them from getting close enough to aggro her.

This cheese is even easier if you have the ring of doubt, as Energy Barrage does not cancel the invisibility, and therefore allows you to be anywhere within attack range to kill the dragon.

You can use this fight to farm for experience and loot from Dragonlings. They reward 36exp per kill along with the chance to drop valuable crafting materials. In order to do this, simply have a rogue with Stealth stay far enough away so that they don't get attacked and allow your 3 teammates to kill the creatures for you. If the loot doesn't appear at your feet (which it should if you're far enough away), then simply use Stealth to run in and grab all the loot. 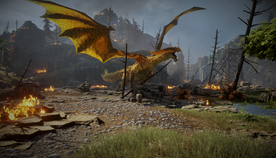 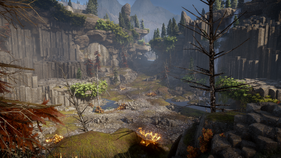 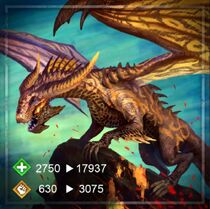 Retrieved from "https://dragonage.fandom.com/wiki/Fereldan_Frostback?oldid=883595"
Community content is available under CC-BY-SA unless otherwise noted.