Improves with level-up
+(120%) damage vs. demons and undead

Fadeshear is a unique longsword in Dragon Age II.

The core of this blade is old. As old as the first smiths who sought a way to battle the nightmares from the land beyond. It has fought the demonic hosts in countless battles. Sometimes it has been held high in triumphant victory. Other times, it has lain broken besides its dying owner. But after every defeat it has always been reclaimed, reforged, and made stronger. Fadeshear has passed through many hands before yours. Now it is your turn to make the demons of the Fade pay for crossing the Veil into the waking world.
—From Codex entry: Fadeshear 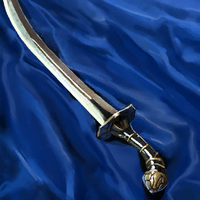 Retrieved from "https://dragonage.fandom.com/wiki/Fadeshear?oldid=776848"
Community content is available under CC-BY-SA unless otherwise noted.