Gurguts are typically brightly-colored creatures predominantly found in wet, marshy regions, whose diet consists mostly of fish and marsh weeds.[1] The name gurgut comes from the sound the creatures make during mating season in the spring. The males perform loud, elaborate dances to attract the attention of the females. Travelers are advised to keep their distance.[2]

The Chant of Light claims that the Maker made us, and in our folly, we think ourselves blessed by such fact. If fact it is, for in my seeking, I find only base illusions, the better for being torn down and mocked as inadequate in the harsh light of reason. But as an exercise, let us say that it is true, that the Maker made us.

I have seen the gurgut basking in a slanted shaft of sunlight in the penumbral canyon, its putrescent tongue scenting the rancid air of the nameless and unnamable swamp, swishing the uncaring grass of the plains with its passage. It is some cousin of the wyvern, but bereft of the savage ferocity for which the latter is praised and hunted by Orlesian nobles. Its thick-lidded eyes stare witlessly, and its jaw hangs agape; it is not befuddled or frustrated by its want of reason, but perfectly content, a drooling idiot.

Its pallid belly stretches and distends, disdaining all reason, when it gorges itself upon its prey. I have seen such a lowly beast swallow a chevalier whole, the great and shining warrior taken by surprise in the tall grass, his silverite armor gleaming as the gurgut unhinged its jaw to draw the chevalier in. Across its belly, I saw the kicks and struggles grow frenzied and then still, and the idiot beast settled into a happy torpor. The ruined armor of the noble chevalier lay among the gurgut's spoor several days later.

Say that it is true, that the Maker made us. What if He made us for food? What if the grand purpose of our searching existence is to stretch the belly of a beast that slinks through the tall grass? What if there is a single unbending purpose and, in it, we are cattle to feed the witless leviathans that slumber unseen beneath us?

—From An Anatomie of Various Terrible Beasts, by Baron Havard-Pierre d'Amortisan[3]

Master makes us check behind him for gurguts at all times. He also carries a very sharp stick.

—Footnote in the margins of the manuscript by the baron's scribe, Dunwich[3]

This section contains spoilers for:
Dragon Age: Inquisition.
The Fade-Touched gurgut is an abnormally large white colored gurgut located northwest of the Swampside Inquisition Camp near the Blood-Stained Shrine landmark. The creature can be found stalking the area not too far from where Colette is first encountered during the quest Worthy of Publication (follow the stream located in front of the shrine and head upwards and to the left). 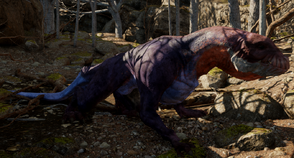