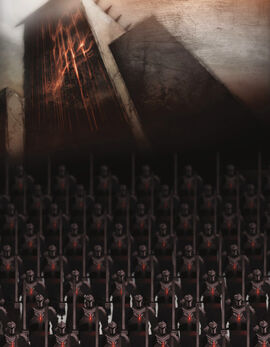 According to the Chantry, the faithful who give their lives to the Exalted Marches earn a special place at the side of the Maker as the "Exalted".[1]

Against the Tevinter Imperium Edit

In around -180 Ancient (1015 TE), a massive horde of barbarians crossed the Waking Sea from the south led by the warlord Maferath and Andraste, the Betrothed of the Maker. Some records claim the barbarians were driven north by the darkspawn, others that Andraste was bringing freedom to the people of the Imperium who had been long oppressed by the depravities of the magisters.[2] The Imperium was forced to abandon the island of Estwatch to focus on their mainland troubles. Maferath's armies steadily gained ground, in part thanks to a slave uprising led by the elf Shartan, and they prevailed at the Battle of Valarian Fields in -171. Before they could lay siege to Minrathous, Andraste was betrayed by her husband Maferath in -170. She was taken to Minrathous and burned alive while Maferath was granted much of the lands in southern Thedas. He took Ferelden for himself, while dividing what would become Orlais, Nevarra and the Free Marches to his sons. For their service in battle against the Imperium, Maferath gave the elves a new homeland in the Dales. The Long Walk began as a massive influx of elves settled the region.[3]

Against the Dales Edit

The cause of the conflict that resulted in the destruction of the Dales is disputed. The Dalish claim it was simple racial and religious persecution, saying templars invaded their kingdom because they refused to let in Chantry missionaries. Chantry sources describe tensions building over the years as the elves became increasingly isolationist: the Dales barred all trade or discourse beyond their borders and only attracted greater ire when they refused to aid the human kingdoms during the Second Blight. There were rumors in the bordering Orlesian lands of the elves kidnapping humans to sacrifice to their gods and tensions reached a head with an elven attack on the village of Red Crossing.[4]

In 2:10 Glory, after the elves had made serious gains, including capturing Montsimmard and sacking the Orlesian capital of Val Royeaux, Divine Renata I called for a holy war. Uniquely amongst the Exalted Marches, only the Orlesian Empire fielded troops against the Dales. Despite considerable victories, the elves were pushed back and eventually defeated; their capital of Halamshiral was conquered in 2:20. Despite this loss, a group of elves refused to admit defeat and made their final stand on the Exalted Plains. The human forces, led by Sister Amity, Lord Demetrius Aron and Ser Brandis of Lac Celestine met them on the field. The elves, who were vastly outnumbered, refused to lay down their arms when given the chance. Lord Demetrius was slain during their charge. The great warrior Lindiranae, wielding the magical sword known as Evanura, eventually challenged Ser Brandis to single combat and was bested, marking the end of their resistance.[5] According to Lord Avery of Montsimmard's research, Lindiranae was not actually defeated by Ser Brandis, who didn't want to see her die in vain and would not strike back, but by an arrow fired by another soldier.[6]

After the elves' defeat, an elven general named Rajmael is known to have thrown himself from Forlorn Falls rather than face defeat.[7] Amity became Revered Mother Amity and served in Ville Montevelan, the first human settlement established in the Dales, for over forty years while Ser Brandis disappeared from history. Mentions of Shartan and elven contribution to Andraste’s cause were labeled heretical by the Chantry, and Chantry artwork and teachings denoting them were removed. The elves were then forced to either assimilate into Orlesian cities (living as second-class citizens in slums called Alienages) or adopt a nomadic lifestyle that separated them from humanity (Dalish).

After King Fyruss had failed to take over the Free Marches, his Tevinter allies turned on him, usurping him in 2:45 and ousting him from Starkhaven.[8] This led the Chantry to declare an exalted march to reconquer Starkhaven from the Imperium in 2:80. The following battle for the independence of Starkhaven was short, but bloody. [9]

Against the Imperial Chantry Edit

In 3:87 Towers, disagreements between priests in Tevinter and orthodox Chantry doctrine, primarily about the role and control of magic, resulted in a schism and the appointment of Valhail as the first "Black Divine" of the Imperial Chantry, in opposition to the Divine in Val Royeaux.[10] Relations between the two factions deteriorated steadily, culminating in the Andrastian Chantry calling for retaliation against the Black Divine after he declared a celebration of the death of Divine Joyous II in 3:99 Towers.

Between 4:40 Black and 5:10 Exalted, a total of four Exalted Marches gathered large armies from around the Andrastian Chantry's domains, and launched assaults deep into Tevinter. Each Exalted March fell just short of its goal of conquering Minrathous, however, and the Marches served mainly to cement the separation between Minrathous and Val Royeaux. The Imperial Chantry started to form its own dogma and policies, and the groundswell of mages fleeing from southern lands into Tevinter bolstered the empire's waning power.[11] It is likely that more Marches would have continued the war, had the outbreak of the Fourth Blight not intervened. Tevinter retaliated for the Marches by refusing to send aid to the southern nations against the darkspawn.

In 6:30 Steel, the Qunari conquered Par Vollen and began to use it as a base to strike at Seheron and Rivain. By 6:42 Steel, they had conquered much of the Tevinter Imperium, Rivain, and Antiva and began to assault the Free Marches. It took many years for human resistance to become organized, and it was 7:23 Storm before the Qunari were pushed back to Seheron and Rivain, but there they were well entrenched and an impasse began.

Between 7:25 and 7:85 Storm, New Exalted Marches are declared repeatedly by both the Imperial Chantry (to retake Seheron and the eastern city of Qarinus) and the Chantry (to retake Rivain). In total, three major Exalted Marches occur with only the second in 7:52 Storm being a total disaster (with the Qunari capturing much of Antiva). At 7:55 Storm a third and final Exalted March is called[12] and at the end of it in 7:84 Storm, the Qunari had been pushed back to only the city of Kont-aar in northern Rivain and Par Vollen. By that stage, rebuilding all the destruction that had been caused was considered more important than trying to dislodge the Qunari from Kont-aar once again. A meeting between envoys of most of the human lands (except for Tevinter) and the Qunari at Llomerryn results in the signing of the Llomerryn Accord in 7:84 Storm and peace being declared. There is no peace between Tevinter and the Qunari, though skirmishes are few while the Qunari pull back to Par Vollen and rebuild.[13]

These Exalted Marches did not happen but Divine Justinia V contemplated in calling them.

During the events of Dragon Age: Origins, this may happen in two cases:

Following the death of the Viscount Marlowe Dumar during the First Battle of Kirkwall and the de-facto rule of Knight-Commander Meredith, tensions between the city's mages and the local chapter of the Templar Order grows considerably, leading many in the Chantry and secular society to fear a mage revolt within Kirkwall. Unwilling to allow these rebellious mages to launch an insurrection, and perhaps the beginnings of a new Tevinter Imperium, Divine Justinia V begins to contemplate an Exalted March on the city to end the threat and restore order, sending an agent to determine the extent of the danger. With the mage uprising in full swing after the destruction of the Kirkwall Chantry and the Mage-Templar War having brought the Chantry to the brink of collapse, it is uncertain if this campaign will ever be called against the city. Following Justinia's death at the Conclave and the rise of the Inquisition, it appears that the Exalted March will never come.

Retrieved from "https://dragonage.fandom.com/wiki/Exalted_Marches?oldid=809315"
Community content is available under CC-BY-SA unless otherwise noted.