Evelina is a Fereldan apostate living in Kirkwall.

Evelina was trained at the Fereldan Circle of Magi for eight years before the outbreak of the Fifth Blight. When the Blight began, she fled to the Free Marches. She claimed she did so to escape the darkspawn, not the Circle. Along the way, she rescued groups of children orphaned by the Blight and brought them with her to Kirkwall. After settling into Darktown with the children, she took herself to the Circle in Kirkwall, thinking that they would help the children. Instead, they locked her up as an apostate and did nothing for her adopted family. Eventually she and a number of other mages managed to escape, destroying their phylacteries in the process. A group of templars pursued her, but she was able to fend them off, killing some of them. Upon realizing what she had done, she fled into the sewers.

In 9:34 Dragon, Evelina can be found begging for coin near Tomwise in Darktown.

Finally, in 9:37 Dragon, Knight-Commander Meredith asks Hawke to retrieve three mages that have escaped the Circle; Evelina is one of these three. Hawke follows Evelina's trail to Darktown. There, Hawke meets a young man named Walter and a young boy named Cricket. The former tells Hawke that Evelina saved him, Cricket, and a number of other child refugees. He inadvertently reveals to the Champion that Evelina escaped into the sewers after the templar attack. Once down there, Hawke discovers Walter and Cricket trying to warn her, but instead find her to be an abomination, having succumbed to demon influences during her prior fight with the templars. She is killed during the ensuing fight. 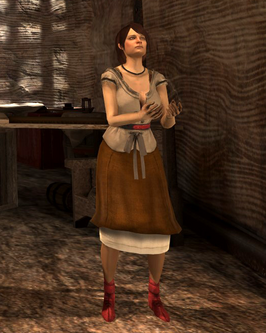 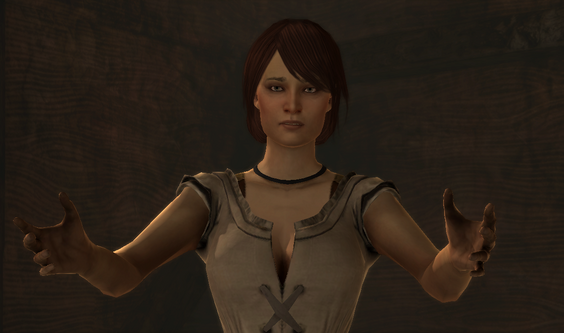 Evelina in Act 3
Add a photo to this gallery
Retrieved from "https://dragonage.fandom.com/wiki/Evelina?oldid=881015"
Community content is available under CC-BY-SA unless otherwise noted.