Edit
watch 02:05
Wiki Targeted (Games)
Do you like this video?
Play Sound
“I touched so much of you. But you are selfish with your glory. Now I'm no one.”

Envy demons are one of the rarer known varieties of demon. They are consumed by the need to not only emulate mortal beings, but become them.

Envy demons are equal parts arrogance and cowardice. They isolate their victims to study them at length, seeking to become them. Once the demon is satisfied it knows its chosen subject, it takes on their form, leaving the poor soul to rot. Envy is never satisfied, however. The demon's bottomless cravings to be more—more powerful, more skilled, more inspired—cause it to seek fresh prey, leaving a trail of stolen identities behind.

—Scroll found on the body of "Scholar Esmar Treviento," by the templars who hunted him down.[1]

The Chantry teaches that envy of the living was the first new thing spirits actually created.[2] Envy demons are among the most insidious spirits of the Fade. They seek out hosts of significant merit, specially those who hold a position of leadership, then study them. They may spend weeks doing so[3], carefully observing their target's mannerisms and interactions with others. Once they have learned enough to emulate their target's psyche, they assume their target's physical form and identity. The original person becomes almost impossible to recognize from the demon, who is a perfect replica of its target. Its mannerisms, tics, and opinions are identical to those of the original person. The unfortunate soul is usually quietly disposed of thereafter, so as to eliminate any possibility of controversy.

Despite their ambition, envy demons are also cowardly. They are cautious not to alert those they have deceived to their true identity. They usually flee if they are exposed, retreating behind arcane barriers of their devising. Envy demons are weakest when they are moving from one body to another.

According to Knight-Templar Delrin Barris, the rank and file of the Templar Order aren't trained in confronting envy demons since they are so rare. Veteran members of the Order know well enough to fight them, and can nullify their defenses if provided with sufficient lyrium.[4]

The Lord Seeker Lucius Corin makes use of an envy demon pawn to masquerade as him and lead the Templar Order while he lured the Seekers of Truth to a trap, as the Seekers wouldn't conform to the use of Red Lyrium. The Demon appeared in Val Royeaux to officially announce that the Chantry no longer held any control over the Templars and leaves after rebuffing the offer of an alliance with the Inquisition.

If the Templars are recruited into the Inquisition:
When the Herald of Andraste travels to Therinfal Redoubt to meet with the Lord Seeker, they bring with them members of ten of the most noble Orlesian houses to pressure the Templars into aiding in stopping the breach. The Envy Demon is consumed with jealousy at the influence the upstart Herald has gained and resolves to kill them and assume their identity. The offer of alliance with the Inquisition spreads dissent through the Templar ranks among those who feel the Templars have been irresponsible in neglecting the Breach. Envy orders the Red templars already fully corrupted by Red lyrium to purge the fortress of any Templars not afflicte by red lyrium. Envy begins gathering information on the Herald by sending its subordinates to their deaths against them in order to gather information on their leadership style.

With its ploy having failed, Envy reverts to its true demonic form and retreats behind a magical barrier. The uncorrupted Templars led by Ser Delrin Barris break Envy's barriers after which the Herald and their companions along with Cole, confront the Envy demon, whom partway through the battle assumes The Inquisitor's form to fight the group. The Envy Demon is finally slain in the confrontation.

If the mages are recruited into the Inquisition:
After the Bull's Chargers are dispatched to Investigate Therinfal Redoubt, they discover evidence of Envy's presence but conclude that it fled the fortress when the Red Templars withdrew.

Cremisius Aclassi leads the Chargers to track down the Envy Demon and after a battle in which Envy assumes the forms of Cassandra Pentaghast, Iron Bull and Cremisius himself, the demon is finally slain.

Champions of the Just (conditional) 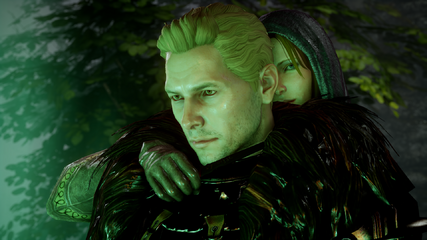 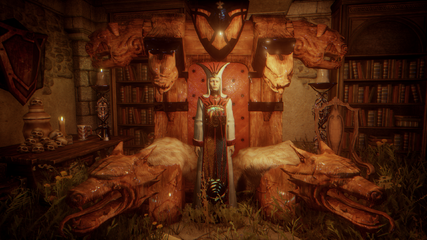 One of envy demon's tormenting depictions was Justinia V behind bars 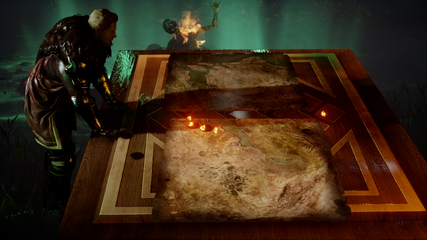 Another is Cullen behind the War Table, marking Arbor Wilds on the map.