True to their codex, the Enraged Corpses lack the spellcasting abilities of other corpse types. Instead, they can go into the Berserk mode, signified by their body getting highlighted in red. They are also the only corpses to use weapons, often (but not always) fighting with a single-handed mace, axe or dagger.

A rage demon that has newly crossed from the Fade has a bit more power and may succeed in animating a fresh corpse. They are clumsy but shrewd antagonists who are adept at appearing far less deadly than they actually are. The decomposition of an enraged corpse varies greatly in degree and appearance entirely depending on how their body died. Their rage is such that they prefer strangling their victims.[1] 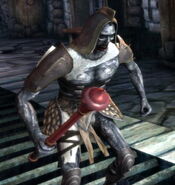 Wielding a mace.
Add a photo to this gallery

Retrieved from "https://dragonage.fandom.com/wiki/Enraged_corpse?oldid=860433"
Community content is available under CC-BY-SA unless otherwise noted.