Edit
watch 02:19
Wiki Targeted (Games)
Do you like this video?
Play Sound
“Denial of the traditions of our people does not qualify as a political technicality!”

Endrin Aeducan was the King of Orzammar from 8:96 Blessed[1] until 9:30 Dragon. His eldest child is Trian, his middle child is the Dwarf Noble and the youngest is Bhelen.

House Aeducan traces its ancestry back to the Paragon Aeducan, the greatest warrior in Orzammar's history, who led the dwarven armies against the darkspawn horde during the First Blight and saving the empire from annihilation. Endrin was only the second child of King Ansgar Aeducan but became heir to the throne when he convinced his elder brother to fight in a Proving against a convicted murderer, thus resulting in his brother's death. According to Bhelen, Endrin was responsible for the poison found on the murderer's blade.[2]

The most respected king in four generations, he restored Orzammar's contact with Kal-Sharok, the only other known great thaig to survive the First Blight.

Endrin Aeducan is first seen during the ceremony for his second child's inauguration as Orzammar's commander during the Dwarf Noble Origin. The next day he participates in an expedition in an effort to support a Grey Warden mission to investigate the possible outbreak of another Blight, as well as reclaim the Aeducan Shield. In the course of these events, the Dwarf Noble is either induced to kill, or framed for murdering, Prince Trian; due to overwhelming evidence, the king is convinced to exile his favorite child. Depending on dialogue choices, his misgivings (or further disappointments) may be expressed at the site of Trian's death, or relayed by Lord Pyral Harrowmont when Endrin's disgraced child is sent alone into the Deep Roads.

When the Dwarf Noble Warden encounters Gorim Saelac in Denerim, he will give a shield and letter from Endrin. The letter states that the king never believed in his child's guilt, but regrettably allowed them to be exiled to avoid a political scandal which could cost House Aeducan the throne.

When the Warden reaches Orzammar, it is revealed that King Endrin recently died of grief over the death of his two eldest children, resulting in political turmoil over who will succeed him, with both Prince Bhelen and Lord Harrowmont putting themselves forth as candidates. Rumors and suspicions that he was poisoned by Bhelen are never confirmed.

If the Dwarf Noble resolves the quest Of Noble Birth and restores his son's noble status, he may name the child Endrin. Bhelen and Rica Brosca's son is also named Endrin. 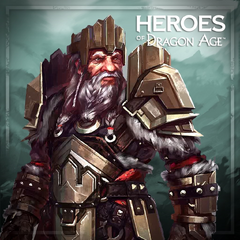