The Emerald Graves is a forested region of the Dales in Orlais. The area is an ancient elven burial ground but has been partly occupied by Orlesians in more recent times.

Long ago, before the fall of the Dales, a tree was planted for every warrior who pledged themselves to the guardianship of the Dales; these warriors were the Emerald Knights of Halamshiral. When humans began encroaching on our borders, the Knights banded together to protect us from their incursion. But the humans were many, and their Chantry powerful, and they eventually conquered the Dales. The trees that once represented the Emerald Knights were now living symbols of their sacrifice—the Emerald Graves.

Orlesian nobility referred to region as the Greatwood; however, when the Dales were still an independent nation the region was commonly labeled the Emerald March. It is said that each tree found in the Graves is a reminder of a life lost during the Exalted March against the Dales.[2]

The southern half of the region is relatively civilized, marked with road signs and Orlesian estates, though they have recently fallen into disrepair from the War of the Lions. Further into the region, the woods teem with wildlife and vast foliage. The area is home to many common beasts including wolves, brontos and nugs. In the northern-most region unique creatures such as giants and great bears roam freely, whilst the Greater Mistral reigns supreme.

Traveling through the Dales, one will see dozens of carven stone wolves. The Dalish call these the Knights’ Guardians. In the days of elven Halamshiral, wolf companions walked alongside Emerald Knights, never leaving the side of their chosen knight. Wolf and elf would fight together, eat together, and when the knights slept, wolves would guard them. The statues were erected in memory of their unbreakable bond.[3]

The Emerald Graves are home to Orlesian refugees that have recently lost their homes due to the encroaching War of the Lions and raiding parties led by the Freemen of the Dales. The Freemen are composed of deserters from both Celene and Gaspard de Chalons's armies. They have taken to harassing the refugees in the area and forced them into hiding; they are also unwittingly colluding with Red Templars and Venatori in pushing the Elder One's agenda in the region, which includes searching the elven ruins at Din'an Hanin and capturing giants for use in mining red lyrium.

The refugees, led by Evariste "Fairbanks" Lemarque welcome the Inquisitor's aid in dealing with the Freemen, Red Templars and Venatori. The Inquisitor can gain access to the Graves by completing the Make Contact in the Emerald Graves war table scouting operation in Skyhold.

Note: The 26 regions below make up the Regions in the Graves collection. Discovering all of them grants 300 Influence.

Note: To register the Southfinger Tower towards the collection counter, the Inquisitor must get as close as possible to the region, otherwise it can be easily missed.

A Bear to Cross

The Freemen of the Dales

Rifts at the Cove

Rifts at the Pavilion

Rifts at the Reach

Rifts near the Sighs

Artifact Requisition in the Graves

Lure Requisition in the Graves

Obsidian Survey in the Graves

Pyrophite Survey in the Graves

Remedy Requisition in the Graves

Absence - search the stack of boxes found in the small room located inside Argon's Lodge.

Landmarks in the Graves

Invasion (piece #6) - in the Veridium Mine, found on a partially open crate next to some barrels with lanterns situated on them.

Invasion (piece #7) - inside Villa Maurel, search the Personal Store Room adjacent to the Study; a warrior is required to break the wall down to access the area.

Invasion (piece #8) - inside Argon's Lodge on a makeshift table with random junk on it, search the room directly to the left of a log pile located in the southeast corner.

Invasion (piece #10) - inside of Din'an Hanin; found in the Knight's Hall on a pew along the eastern wall.

Invasion (piece #11) - on the southwest balcony of Chateau d'Onterre; jump out of the bedchamber window onto a ledge then jump to the top of the nearby building on the right.

Invasion (piece #12) - in Chateau d'Onterre; on the left-hand wall inside the locked room off of the Grand Balcony.
Note: Requires Deft Hands, Fine Tools Inquisition perk.

Shards in the Graves

Dalish Banner - in a barrel, found in the empty shack close to the entrance of Argon's Lodge.

The Girl in Red Crossing - found inside Chateau d'Onterre.

Ardent Blossom - looted from a chest under Suledin Keep in Emprise du Lion, the chest only spawns upon completion of the side quest The Tiniest Cave.

Cordova's Smile - available for purchase from Gertrude for 3296

Deathward - see Astrariums in the Graves

Estwatch Guard - looted from a Revenant in Din'an Hanin; see side quest The Knights' Tomb.

Evanura - locate Codex entry: The Silver Knight in the Exalted Plains then search near the Lindiranae's Tree landmark.

Gift of the Talons - looted from the Greater Mistral high dragon.

Helm of the Inquisitor - looted from the Greater Mistral high dragon.

In War, Victory - looted from the Greater Mistral high dragon.

Longshot - found on a corpse next to the Twisted Tree landmark, just north of the Greater Mistral high dragon.

Soulkisser - looted from Sister Costeau in the Veridium Mine; see side quest A Fallen Sister.

Superb Ring of Staggering - looted from a chest in the locked room on the Grand Balcony; see side quest Chateau d'Onterre.

Codex entry: From the Canticle of Threnodies

Codex entry: Of Gods and Doubt

Codex entry: The Death of Elandrin

Codex entry: The Exalted March of the Dales

A Candle for Tristan

A Sketchbook (from a hobbyist)

Torn Pages (Nothing to hunt)

A Torn Page (the Herbalist)

An Apology (to Colette)

A Letter to Maliphant

A Camp at Emerald Graves 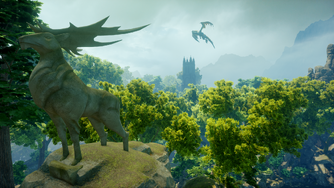 The Greater Mistral flying in the background of a hart 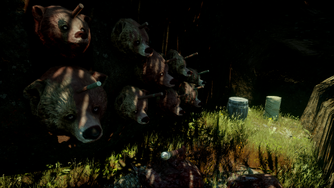 A mysterious cave with bear heads mounted on its wall