The elven pantheon, also known in elven as the Evanuris, is comprised of five gods and four goddesses, whom the modern Dalish elves call "the Creators". The pantheon is led by Elgar'nan the All-Father, god of fatherhood and vengeance, and Mythal the Protector, goddess of motherhood and justice. There are also references in elven mythology to another race of gods, called "The Forgotten Ones", the enemies of the elven pantheon. It is said that Fen'Harel was the only one able to walk freely between the two clans, and they both thought of him as one of their own.

Interestingly, elven belief holds that -though the elven gods are credited with creating the gifts of the world (and in some cases for recreating the world itself)- they, too, were borne of the earth and are not considered responsible for its initial creation[1] Unlike the Old Gods, the elven pantheon were never believed to have walked in the mortal realm or to have directly challenged the Maker.[2] Their current location is uncertain, as they do not, apparently, interact with the mortal world. However, elven belief holds that the Fade, or the "Beyond" as it is known to the elves, is considered a holy place and the gods are trapped there in the "Eternal City".[3]

In elven history, orbs called "foci" were sometimes used to channel the power of the elven gods for various reasons. These items were usually associated with a particular member of the elven pantheon.

Their power required a great deal of energy to unlock.[5]

Solas, who is actually revealed to be Fen'Harel, states that the ancient elven gods were not really deities as the Maker is perceived, but rather very powerful beings. Whether they were mages or spirits or something else entirely unencountered and forgotten, Solas says they have a deep and powerful connection to the Fade, where they dwelled and spoke to the elves through various rituals performed in certain locations. Solas also remarks that the elven "gods" were arrogant and fickle, as they warred amongst themselves and had feuds and vendettas. A similar attitude is expressed in an inscription attributed to Geldauran, one of the Forgotten Ones.

The elven pantheon was revered in the time of Elvhenan, before the humans came to Thedas. Little is known about how the gods were worshipped at this time, except that the gods had temples with guards in specially made armor,[6] the elves worshiped their gods for months at a time,[7] and that worship may have included rituals involving water and kneeling and praying before altars.[8]

Once the elves found that the very presence of the humans, or "quicklings," caused the once immortal elves to age and die, they attempted to isolate themselves. Many believed that the gods had judged them unworthy of their long lives and cast them down among the quicklings.[7]

This section contains spoilers for:
Trespasser.
This is discredited by Solas, who says that the elves had in fact lost their immortality due to the creation of the Veil and not the Tevinter Imperium. "It was not the arrival of humans that caused us to begin aging... The Veil took everything from the elves, even themselves."[5]

The elves retreated within Elvhenan but were ultimately conquered and enslaved by the Tevinter Imperium. During their centuries of slavery, the elves lost most of their language and history and the worship of the old elven pantheon declined. However, the elves, led by Shartan, fought alongside Andraste in her fight against the Imperium, and their reward was a new home in The Dales, where the worship of the elven pantheon could be revived. The elves left Tevinter for their new homeland in -165 Ancient (1030 TE).[9]

Though Andraste's sons honored her promise to the elves and gave them their new homeland, it was to be short-lived by the standards of Elvhenan. Over the next 270 years or so, relations between the elves and their human neighbours deteriorated. By the early Glory Age, there were numerous border skirmishes between the Dales and Orlais, which soon escalated into war. When it appeared that the elves might actually capture Val Royeaux, the Chantry called for a holy war, resulting in a new Exalted March against the Dales that completely crushed the elves by 2:20 Glory. The lands of the Dales were appropriated by Orlais, with elven settlements being uprooted and worship of the elven gods forbidden. Elves who accepted the Chantry's offered truce were required to accept the Maker and live in ghettos, known as alienages, within human settlements. Some elves, however, refused to give up their worship or their dream of their own homeland, and they became the Dalish. Today, all that is left of the pantheon are old statues, Elven temples in ruins, and lingering stories.

Following the initial events of the Exalted Council, the Inquisitor uncovers the reality that the Elven Gods were in fact phenomenally powerful mages who rose in prominence after the end of an unknown war. Solas implies that the Evanuris started out as generals during the war, then respected elders, and finally were revered as gods. They started out as heroes of the famed war eventually becoming corrupt tyrants in order to hoard and maintain their own power. The Evanuris institutionalized a system of slavery using Vallaslin as a brand, with only Fen'Harel (and more subtly, Mythal) challenging their tyranny. Most of the gods were arrogant in their ways, their power and attitudes more akin to the Tevinter Magisters. Eventually, the other Evanuris plotted against Mythal and killed her, prompting Fen'Harel to lead a rebellion against them and later creating the Veil to banish them into the Beyond.

It is also heavily implied that the Evanuris still live, and that if Solas carries out his plans to tear down the Veil they’ll be freed.

Elgar'nan—also known as the All-Father, the Eldest of the Sun and He Who Overthrew His Father[10]—represents fatherhood and vengeance, and leads the pantheon with the goddess Mythal.

Mythal, the Protector and the All-Mother, and goddess of love[11], is the patron of motherhood and justice and leads the pantheon with her male counterpart, Elgar'nan.

Falon'Din: Friend of the Dead, the Guide[]

Falon'Din is the elven God of Death and Fortune and guides the dead to the Beyond. He and his twin brother, Dirthamen, are the eldest children of Elgar'nan the All-Father and Mythal the Protector.

Dirthamen is the twin brother of Falon'Din and is the elven god of secrets and knowledge, and master of the ravens Fear and Deceit. Dirthamen gave to elves the gift of knowledge and taught them loyalty and faith in family.[4]

Andruil: Goddess of the Hunt[]

Andruil is the elven Goddess of the Hunt, known also as "blood and force" and the "great hunter."[12]

Sylaise, the Hearthkeeper, is the goddess of all the domestic arts[13] and the sister of Andruil the Huntress. Sylaise gave the elves fire, and taught them how to weave rope and thread, and to use herbs and magic for healing purposes.

June: God of the Craft[]

June is the elven Master of Crafts. He is variously described either as a brother to Andruil and Sylaise[4] or as Sylaise's husband[13]. He taught the elves to make bows, arrows, and knives to hunt Andruil's gifts.[4]

Ghilan'nain: Mother of the Halla[]

Ghilan'nain is called the Mother of the halla—white deer-like creatures revered by the Dalish and used to pull their aravel, or "landships"—and goddess of navigation.

The Dread Wolf is an enigmatic trickster god of the elves, whose supposed betrayal of both the benevolent Creators and the malefic Forgotten Ones is the only explanation most elves have for the destruction of Arlathan. Dalish clans view him with wariness and seek to protect themselves and their kin from his treachery.

It is revealed by Solas in Mythal's temple that this could be a misinterpretation by the Dalish and instead he was the god of rebellion.[14]

Main article: The Forgotten Ones

Only in dreams do we hear whispered the names of Geldauran and Daern'thal and Anaris, for they are the Forgotten Ones, the gods of terror and malice, spite and pestilence.

There are references in elven mythology to another race of gods: gods of evil, with whom the gods of the elven pantheon fought an endless war. These gods are now known as the Forgotten Ones, and for good reason as even the hahrens, or elven elders, know little to nothing about them. According to legend they, along with the elven pantheon, were trapped away from the world at around the time of the fall of Arlathan.

I asked him about the intricate tattoos on his face; he told me they were called vallaslin—"blood writing." His were symbols of Andruil the Huntress, one of the most highly revered elven goddesses.

When a Dalish elf comes of age, they are marked with intricate tattoos representing one of the elven gods. The tattooing is preceded by meditation on the gods and the ways of the Dalish, and by purifying the body and the skin. It is not known whether this practice was part of the worship of elven gods in ancient Elvhenan or is a more recent development.

This section contains spoilers for:
Dragon Age: Inquisition.
Solas claims that ancient vallaslin is, in fact, a practice that was used by the nobles to mark their slaves in times of ancient Arlathan, with each pattern representing the god favoured by the slave's master. Modern vallaslin, however, has different intents, including representing that the Dalish will never surrender their traditions or beliefs. 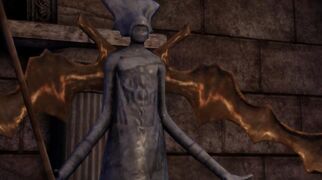 In ancient Arlathan, statues like this honoured the creators. 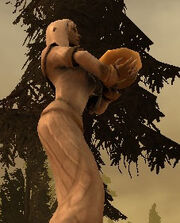 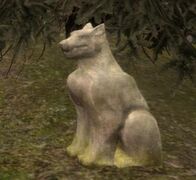 A statue of Fen'Harel, the "Dread Wolf" found at a Dalish campsite. 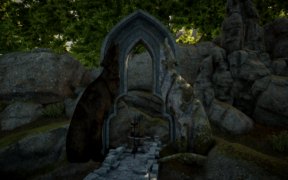 A shrine to Fen'Harel in the Crow Fens (Exalted Plains)