Start a Wiki
The Elven language, or "Elvish",[1] was largely lost when Elvhenan fell to the Tevinter Imperium and its people were enslaved around two millennia before the Dragon Age. When the elves settled their second homeland, the Dales, they aimed to restore their lost language and lore, but the Dales fell after an Exalted March declared by the Chantry in the early Glory Age. The Elvish of the Dragon Age is thus a fragmented remnant, a few words that are thrown into conversation rather than a working language used to conduct everyday life. The Dalish Elves, self-appointed custodians of the elven language and lore, use more Elvish than their City Elf brethren. Some clans, such as the ones encountered in Dragon Age: The Stolen Throne, speak it fluently and exclusively. Living among humans, the City Elves now retain only a few old Elvish words whose origin is almost forgotten, such as shem — derived from shemlen, the old Elvish term for humans meaning "quickling" or "quick children," — and hahren — the leader of an Alienage, meaning "elder" in Elvish.

Dahl'amythal: Tree of Mythal from which Dalish Keepers’ staves are cut.[69]

Din'anshiral: A journey of death.[71]

Dirthavaren: The promise; the Elven name for the Exalted Plains.[72]

Durgen’len: Children of the stone; the Ancient Elvish term for the dwarves.[57][74]

Elgar'arla: Spirit-trap; a binding circle to hold a spirit or demon.[76]

Elvhen: Elven name for their own race; our people.[78]

Elvhenan: The name of the elven civilization before the arrival of humans in Thedas; the place of our people.[79]

Evanuris: Leader;[64] Translated by Dorian in context as "mage leader";[82] what the elvhen called their gods.

Fenedhis: Meaning officially undefined as of yet; a common curse.[87]

Halamshiral: The capital of the second elven homeland in the Dales; the end of the journey.[89]

Hanal'ghilan: Elven name for the mythical golden halla said by the Dalish to appear during times of great need; the pathfinder.[91]

Lethallin/Lethallan/Lethallen: Casual reference used for someone with whom one is familiar; generally, lethallin is used for males while lethallan is used for females;[94] lethallen has been stated to be the appropriate gender neutral term unless otherwise stated later in canon, though it is likely to remain the same[95].

, your fellow clansman, Tamlen, will once refer to you as "lethallin" for a female warden, and as "lethallan" for a male[96]. And in Dragon Age: Inquisition, Solas will refer to a female elf Inquisitor as lethallin a few times, as does Minaeve in Haven. However it is unclear if this is intentional or a production error.

Lethanavir: Friend to the Dead.[97]

Mien'harel: Rebellion; depending on the interpretation, a violent call for justice; a concept that when humans push the elven population too far they must remind them that even a "short blade" must be respected; most commonly a term used by city elf.[101]

Revasan: The place where freedom dwells.[104]

Setheneran: Land of waking dreams; a place where the Veil is thin.[105]

Tarasyl'an Te'las: The place where the sky was held back; Ancient Elven name for Skyhold.[110]

Vallasdahlen: Trees planted in remembrance of those who dedicated their lives to the Dalish kingdom that grew into a mighty wood;[112] life-trees.

Vallaslin: Blood writing; The art of tattooing adopted by some elves to more prominently display their worship of the traditional elven pantheon.[113]

Vhenan: Heart; often used as a term of endearment.[116]

Vir'abelasan: The place of the way of sorrows; refers to the Well of Sorrows.[117]

Vhenallin: Friends of the People.[119]

Suledin is "an elven song about enduring and emerging from sorrow, tied to the loss of their ancient lands, but commonly adapted to express personal struggles as well."[108]

A traditional Dalish Lullaby found in the children's book "The Seer's Yarn", collected by Seer Agata.[120] 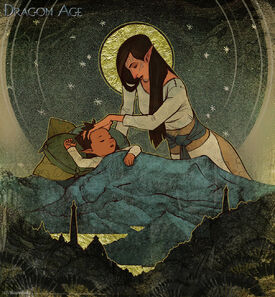 An elven version of a lullaby local to Denerim and nearby villages to the south.[121]

Retrieved from "https://dragonage.fandom.com/wiki/Elven_language?oldid=867644"
Community content is available under CC-BY-SA unless otherwise noted.