The Elven Mountain Ruins are ruins of an ancient elven dwelling hidden high in an unknown mountain range outside[1] Orlais. The main structure is on an island in the lake, while three large sentry towers are situated on nearby mountaintops.

In the time of Elvhenan the whole valley was a sanctuary created by Fen'Harel for elven slaves. It was guarded by his people. He rejected the divine mantle himself and taught the refugees the truth about the Evanuris, powerful mages who posed as gods. Fen'Harel removed the vallaslin that the Evanuris used to mark their slaves, and the freed elves then fought back against the pretender gods.[2]

The Inquisitor enters one of the sentry towers through an eluvian while following the trail of a Qunari who was found dead in the Winter Palace. The bridge to the central island is broken, and the Inquisitor is left to search the three towers interconnected with eluvians for clues. More Qunari bodies in similar clothing lay around. They all appear to have been recently taken by surprise and killed by magic. Their notes are written half in Qunlat and half in the common tongue.

In the second tower the Inquisitor encounters elven spirits. If the Inquisitor drank from the Well of Sorrows, they know the secret greeting from those Fen'Harel trusted and can pass safely. Otherwise the spirits consider them intruders and engage in combat. The Inquisitor's Anchor interacts with veilfire-like mosaics in the towers. They disappear, revealing hidden passages and ancient memories of the place.

The Inquisitor's hand starts to hurt in the third tower near an elven device, and they acquire the Anchor Discharge ability. A small wolf statue nearby summons more spirits when touched. The statue fits into the pedestal by the bridge and allows to raise its missing section.

Qunari attack the Inquisitor on sight in the sanctuary behind the bridge. The Qunari themselves are fighting spirits as well. A large mural on the far wall of the building depicts Fen'Harel removing elven vallaslin. The statue of the Dread Wolf next to it guards a secret passage and moves when the Inquisitor solves a puzzle, a part of the "Lateral Thinker" achievement.

Hidden armory behind the last mosaic down below is also occupied by the Qunari. After they are defeated, the Inquisitor finds a plan of attack on the Winter Palace with a shock trooper. A note about an unknown intruder who awoke the spirits and fled lies nearby. With that knowledge, the Inquisitor departs for the palace.

Prophet's Laurel - side of the Forgotten Sanctuary

Silverite - side of the Forgotten Sanctuary 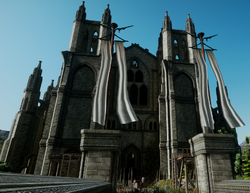 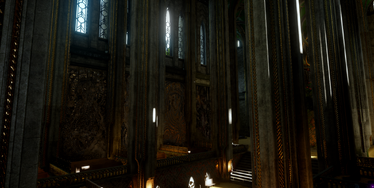 The interior of the Sanctuary 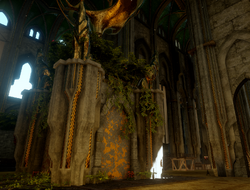 The monument in the Sanctuary 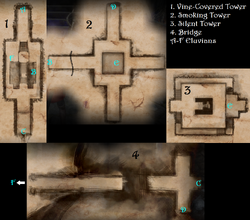 Maps of the towers and the bridge

Map of the sanctuary/armory
Add a photo to this gallery

Retrieved from "https://dragonage.fandom.com/wiki/Elven_Mountain_Ruins?oldid=886136"
Community content is available under CC-BY-SA unless otherwise noted.