A magical mirror of elven origin.

An Eluvian (Elvish for "seeing glass") is a magical mirror.

The elves of Arlathan left no roads to travel between their cities. Instead, they used these enchanted mirrors to communicate and travel from great distances, using a type of magic different from that of the modern Circle of Magi or even the Tevinter Imperium.

Eventually many eluvians were destroyed. An unknown number of eluvians have survived to the present day, scattered across Thedas in forgotten or well hidden locations, but they seemingly stopped functioning or became corrupted, capable of spreading the darkspawn taint. It was assumed that their use was lost after the fall of Arlathan.

The Tevinters attempted to unlock the secrets of the eluvians, but all they could use them for was long-distance communication.[1] Some Dalish have also attempted to rediscover and reactivate the eluvian network to no avail.

During the Dalish Elf Origin, Tamlen and Mahariel discover an eluvian. Tamlen claims to see scenes from an underground city through the mirror and proceeds to touch it. This causes a flash of light, which causes Mahariel to lose consciousness for two days. After this incident, Tamlen disappears.

If the Hero of Ferelden is a Dalish Elf:
The clan's Keeper, Marethari Talas, sends a party to the cave to search for Tamlen, but instead they meet Duncan of the Grey Wardens. He explains that the mirror is somehow transmitting the darkspawn taint and proceeds to destroy it, before informing Mahariel that they have been infected by the eluvian and need to join the Grey Wardens in order to survive.


The clan's Keeper sends a party to the cave to search for Tamlen, but they found only the eluvian, already destroyed by means unknown.

This section contains spoilers for:
Witch Hunt.
In 9:32 Dragon, the remains of the same eluvian from the Dalish Elf Origin are used by the Warden-Commander in a scrying ritual to locate another, functioning one in the Dragonbone Wastes. Morrigan, who had stolen an ancient treatise on eluvians from Ariane's clan and found the mirror first, reveals that eluvians can also act as portals not only to other points in Thedas, but also to a realm beyond the Fade. Depending on the Warden-Commander's actions, she can be followed through the eluvian, but the players are never shown what lies beyond.

In 9:34 Dragon, Merrill reveals that she is trying to construct a new eluvian from a shard she took during the events of the Dalish Elf Origin and that she has succeeded in cleansing its taint through use of blood magic. She studied the lore on the eluvian, and extrapolated information from the shard.[2] Her companion quests revolve around acquiring items or information to restore the mirror.

To complete her labor, Merrill ultimately seeks aid from a pride demon imprisoned within Sundermount, but Keeper Marethari prevents this by sealing Audacity inside herself to protect her former First. Merrill and her companion Hawke were forced to kill Marethari in a confrontation. Before dying, Marethari claims that the demon only sought to use the eluvian to escape from its prison and would have killed or possessed Merrill in the process (although it's unknown whether or not the Keeper was correct). Depending on Hawke's relationship with her, the fate of Merrill's restored eluvian is revealed at the end of her personal storyline.

Within the borders of Orlais, the Virnehn clan of Dalish summoned the demon Imshael to help reactivate the eluvian network.

Imshael created a Keystone that would lead whoever wielded it to a central chamber connected to all of the eluvians in Thedas. From there, whoever holds the Keystone could reactivate the eluvians and reset the spoken password needed to travel through them.

Imshael offered the Keystone to the clan's keeper, Thelhen, in exchange for a body to possess. Thelhen refused and imprisoned the spirit indefinitely, so Imshael tricked Empress Celene's champion, Ser Michel de Chevin , into freeing it, and gave Celene the Keystone as a token of gratitude.

The beleaguered Empress of Orlais and her entourage used the Keystone to travel through a series of underground elven tombs connected by eluvians and eventually reached the central chamber of the network.

Their journey revealed that the eluvians are connected to one another via pathways in another realm, separate from the Fade. The realm—largely colorless but for a brightly-lit stone path—was created by the elves of Arlathan and is inimical to humans, who experience disorientation and physical discomfort that elves don't.[3] In fact, the grey strange world between the eluvians seems to "like" elves, responding and filling with color at their touch.[4] Elves appear to see this world differently, and also move much quicker than humans while in it.[5]

Inside the central chamber, Empress Celene was betrayed by Briala, her Elven spymaster and lover, who seized the keystone for herself. Briala reactivated all the eluvians across Thedas and bound their use to a spoken password that only she knew: "Fen'Harel enansal", the Dread Wolf's blessing.

After sending Celene and the rest of their party back to the surface, Briala vowed to use the eluvians to aid and unify the City elves of Orlais. She also sent word to the Dalish that she would grant them access to the eluvians as well, if they are willing to acknowledge city elves as their equals and assist their brethren.

After joining the Inquisition as the Orlesian liaison, Morrigan shows the Inquisitor her eluvian. After activating the eluvian, she shows the Inquisitor the nexus that the portal leads to, which she calls "the Crossroads". She voices her theory that Corypheus is scouring the Arbor Wilds in search of another eluvian for the purpose of physically entering the Fade so he can approach the Black City.

The Inquisition indeed finds another eluvian at the Temple of Mythal, only capable of being unlocked by the mystical Well of Sorrows. As the Well is the Eluvian's "key", either Inquisitor or Morrigan drink from the Well to unlock its power and render it useless. As Corypheus bursts into the temple, the party retreats back to Skyhold through the eluvian, and an unknown female figure emerges from the Well. As the female figure enters the eluvian, it is shattered on contact, resulting in yet another blow to Corypheus and his plans.

If Morrigan performed the Dark Ritual, her son, Kieran will enter the eluvian but arrive in the Fade. This is where he will meet Flemeth. After this encounter; the Inquisitor, Morrigan and Kieran return to Skyhold, and Morrigan will close the eluvian behind her.

If the ritual was not completed and Morrigan was chosen in the Temple of Mythal, she will mention that the ancient elves had closed all paths to the Crossroads long before the fall of Arlathan. They warred with themselves, and the eluvians were sealed to prevent an enemy from using them to attack.

In the post-credits scene, Flemeth is shown touching the surface of an active eluvian in an unknown location.

This section contains spoilers for:
Dragon Age: Inquisition.
There appear to be the remains of an eluvian in one of the sacrificial caves deep underneath the Deep Roads in the Bastion of the Pure. It is unknown what damaged it and who used it, and for what purpose.

In 9:44 Dragon the Qunari have gained control over a part of the eluvian network. They stumbled across it independently.[6] Since either knowledge or power can be a key to an eluvian, they stockpiled both which allowed them to open many mirrors.[7] The Qunari prepared to invade using the eluvians, the Inquisitor being one of their main targets.

After the defeat of the Qunari plot, the eluvian network is revealed to be under control of Fen'Harel. For a time Briala also controlled a part of the labyrinth, but Fen'Harel overrode the magic personally.[6] 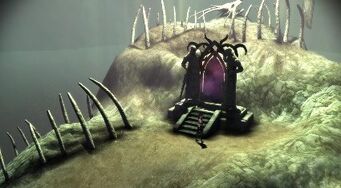 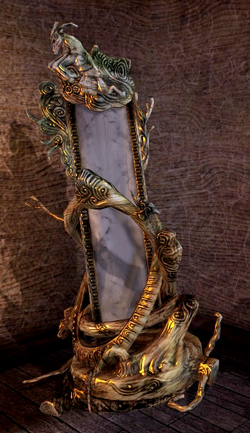 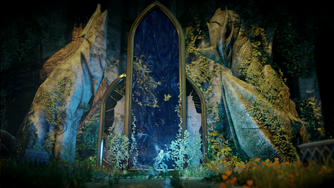 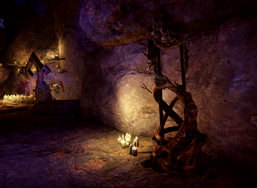