Edit
watch 02:23
Wiki Targeted (Games)
Do you like this video?
Play Sound
“The Chantry is not a domineering father with the whip always in hand. She is a gentle mother, who knows that her children learn best when allowed to learn themselves.”

Elthina is the Grand Cleric of the Free Marches south of Starkhaven and as such is one of the most powerful people in Kirkwall. She can be found inside the Kirkwall Chantry.

Elthina was born in a small village in the Vimmark Mountains. When she was young, her parents died of fever and she was taken in by the Chantry. She became a lay sister as a girl. Though she was given the choice to leave when she came of age, Elthina elected to stay and take her vows. She moved south to Kirkwall when she was twenty. She soon became a revered mother there. She was appointed grand cleric of the Free Marches by Divine Beatrix III when her predecessor died, approximately thirty years after Elthina had first come to Kirkwall.[1]

Elthina tried and imprisoned the former Viscount, Perrin Threnhold.[3] As the Grand Cleric, she appointed Meredith to the position of the Knight-Commander of Kirkwall. She has been Grand Cleric for almost twenty years and is well-loved by the entire city, but some claim her to be ineffective and are quietly calling on the Divine to appoint a replacement.[4]

Hawke first sees Elthina outside the Kirkwall Chantry. She tells Sebastian that the Chantry cannot condone murder and tries to remove the poster offering bounty on the heads of mercenaries who killed his family from the Chanter's Board. Inside the Chantry, she apologizes for Hawke witnessing the "disgraceful scene". Elthina expresses her belief that the Fifth Blight was stopped by the will of the Maker. If asked about Meredith, Elthina claims that "it is not [her] role to form opinions on her character".

When Hawke comes to the Chantry after Petrice has set Hawke up to be killed by the Qunari in order to instigate the conflict, Elthina comments that some brothers and sisters "take the Qunari threat too personally."

At some point after this, Elthina promotes Petrice to the rank of "mother".

Hawke overhears Sebastian asking for Elthina's forgiveness as he no longer sees killing the mercenaries as justice. Elthina replies that death is never justice. When Sebastian says that he wants to confront Lady Harimann and asks Hawke to accompany him, Elthina urges Sebastian to give this up and to dedicate himself to the Chantry. Addressing the issues of the Qunari, the mages and the templars, Elthina states that it is best to guard themselves by waiting and that "it is not [her] place to decide who is right."

Hawke can also have additional lines of dialogue with Elthina:

When the Viscount's son, Saemus, is found dead in the Chantry, there are two potential outcomes:

By 9:37 Dragon, Elthina has rejected Meredith's request for the Right of Annulment[6] and, according to Ser Karras, Meredith has sent for the permission of the Divine in Val Royeaux instead.

In Hightown, Orsino is trying to convince the nobles that Meredith uses the fear of mages to take control of Kirkwall. Meredith accuses him of inciting a rebellion. Then Elthina arrives and asks the templars to "show the First Enchanter back to the Circle," adding an injunction for them to treat him "gently," and Meredith to "go back to the Gallows and calm down, like a good girl." If the Champion asks Elthina why she does nothing when she is in charge of the templars and the Circle, Elthina retorts that Hawke has "quite the estimation of [her] abilities."

In the Chantry, Hawke witnesses Sebastian asking what is Elthina's stance on the issue of the mages and the templars. Elthina states that she favors peace and if the Maker is merciful, he will help them find it. She confesses that she did not expect things to deteriorate so fast. Then she tells him that the Divine sent an agent to Kirkwall to assess the danger of the Free Marches becoming another Imperium. Elthina is afraid that the Divine will treat the whole city as enemies, so she asks the Champion and Sebastian to meet the agent and to convince her that drastic measures won't be required. Elthina adds that the Divine has heard her protests already.

When Hawke returns only to pass the agent's message that Elthina must leave Kirkwall for Orlais because she will not be safe in the city, Elthina refuses to abandon her flock. She asserts that she is in no personal danger since nobody would dare attack the Grand Cleric. Later Elthina tells that she has been talking with both Orsino and Meredith and that Orsino "is not an unreasonable man;" she feels, therefore, that a compromise can be reached.

When Anders asks Hawke to help him gather ingredients for a "potion" and then to distract Elthina for him to get inside the Chantry unseen, Hawke can:

If Meredith is the one to ask Hawke to investigate the matter of Thrask's conspiracy, she explains to the Champion that she needs hard evidence of Orsino's direct involvement to bring before Elthina, because Orsino has persuaded the Grand Cleric that Meredith "is being unreasonable." Alternatively, if it is Orsino who asks for assistance, he expresses his hope that Circle mages are not involved in something sinister, or "Meredith will have what she needs to justify the Right of Annulment."

In the end, the apostate mage Anders blows up the Chantry, killing Elthina and everybody else inside. Sebastian is crushed. He vows to avenge Elthina if Hawke refuses to kill Anders. Meredith invokes the Right of Annulment, starting the Kirkwall Rebellion.

(+5) friendship with Aveline Vallen and Isabela by choosing "The hero of Ferelden stopped the blight, not the maker". Conversely you gain

(+5) rivalry with both Aveline and Isabela by choosing "He works in mysterious ways".

When you speak to her during Act 2 you can gain:

Note: You can choose the other of the two options after choosing the first one and gain Aveline's friendship or rivalry. In the end this will result in

(+5), i.e. in zero approval change. Any of the two options will still yield approval only once. 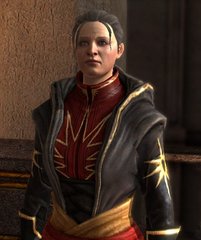