Elgar'nan (ell-GAR-nan)—also known as the All-Father, the Eldest of the Sun and He Who Overthrew His Father[1][2]— is the elven god of vengeance and the sun[3] who represents fatherhood and leads the pantheon with the goddess Mythal.

Long ago, when time itself was young, the only things in existence were the sun and the land. The sun, curious about the land, bowed his head close to her body, and Elgar'nan was born in the place where they touched. As a gift to Elgar'nan, the land brought forth great birds and beasts of sky and forest, and all manner of wonderful green things.
—From Codex entry: Elgar'nan: God of Vengeance

He was the first of the elven gods, born of the sun and the earth. According to elven legend, the sun grew jealous of the favor shown by Elgar'nan for the things of the earth, and so burned them to ashes. In retaliation, Elgar'nan threw the sun down from the sky, and only later relented because of Mythal's intervention. He was convinced, with her help, to restore his father to the sky on the promise that the sun would set each night. With the aid of Mythal and his parents, Elgar'nan remade the world.[4][2] Most elves will invoke Elgar'nan's name when they seek retribution.

The Dalish believe that when Elgar'nan buried the sun in the abyss, some of its heat remained in the Earth and gave rise to hot springs in the Dales. They call the springs the Pools of the Sun and treat them as sacred.[5] They also believe that the sun's lifeblood spilled in the battle with his son became the stars.[1]

The Dalish tell a story about how the dwarves fear the sun because of Elgar'nan.[6]

Ancient elves would not call on Elgar'nan to deliver justice, for his fury would destroy all it touched. Elgar'nan agreed to Mythal's offer to dispense justice instead and bound all to abide by her verdicts.[8] However on at least one occasion, when Mythal did not show favor to the sinner who dared to fly in the shape of the divine, she let Elgar'nan judge him instead.[9]

Elgar'nan followers asked for his help in taming the land that shook their cities. They sought to defeat the usurpers who threw down their work.[10]
This section contains spoilers for:
Trespasser.

Elgar'nan appears to have lead ancient elves who drove the dwarves underground, although the details are obscure.[6]

When Falon'Din and Elgar'nan found themselves in an argument, Mythal defused the situation by suggesting that they appoint their knights to battle in their stead, thus avoiding a civil war among the gods. Elgar'nan's champion won the duel.[11]

A monument commemorated Elgar'nan's victory and him being "first among the gods". Thousands of slaves made it in a single afternoon from an enormous lump of fallen stone. The eidolon was stern in appearance, with light radiating from his narrowed eyes and an open, snarling mouth.[12]

Elgar'nan is believed to wield fire[13][6], light[14] or lightning[10] that would burn his enemies to ashes. Constellation Solium, or "the Sun", may have originally represented him.

The largest temple of old Halamshiral was dedicated to Elgar'nan.[15] Elgar'nan's Bastion is located in the Emerald Graves.[16]

Codex entry: The Judgment of Mythal 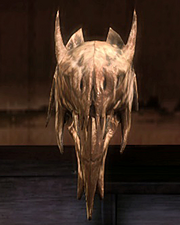 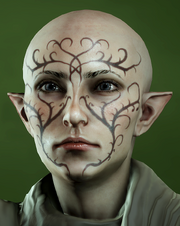 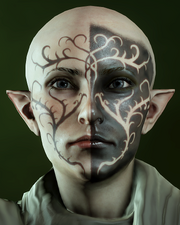 Retrieved from "https://dragonage.fandom.com/wiki/Elgar%27nan?oldid=891792"
Community content is available under CC-BY-SA unless otherwise noted.